Text description provided by the architects. This house occupies a plot in a housing development called Caselles d’Avall, located in the municipality of Porqueres, on the way from Banyoles to Besalú. It is a small-sized plot, in a very steeply sloped terrain. It is oriented to North-East, where the best views are, from Martís Plain in the foreground, to Torroella’s castle with the sea in the background (in clear days). In winter, Banyoles’ Pond can be seen. The house enclosure is made of perforated metallic dark yellow sheets to protect it from the street views.

The building tries to unfold itself in order to cover the entire plot. We began the project drawing lines all over the surface, from the street to the last border of the plot, from one corner to the other, retracing all the contour lines and trying to retain this topography. With the will to know the site, these lines try to reveal its qualities. The first contention walls appear, and between them, the first spaces. We like to recognise in the walls, the foundations and in the future building the lines that began the project and are built now. These lines will define the volume-spaces which will occupy a part of the excavated space, or a part of the air space: facing the back to the street, and closing more private spaces which look to the landscape.

The programme is organised in a traditional way by adding volume-spaces. The main volume, which will be shared by the whole family, is located in a central place. It organises the common spaces such as the kitchen, the dinning and living rooms. Above these spaces, there is the library and the studio, linked to the landscape through big horizontal windows. Complexly, the walls/construction lines organise the adjacent space-volumes. Firstly, the garage with the son’s room over it, the night parents’ spaces and a guest room in an intermediate and isolated space, the space for the daughter (half underground) illuminated by windows aligned with the swimming pool level. We like to think of this disposition as the result of a negotiation between the architect and the customer, the family: parents, son and daughter; where compromise and dialogue play an important part, and there is a will to share decisions and ambitions.

A daily dialogue: a project that can be interrupted at some points, that has to adapt itself to the opinions that the user would have. To build with the capability to correct, assuming the corrections as embeddable data in the project and that can create a meeting point with the customer. No structural show-off, just according to the customer and builder possibilities. We are interested, especially in domestic architecture, that it should not be an imposed previous formal desire, but a silently and easily accepted habitat. There should be certain complicity, assuming reasonable conditions of comfort and use. It is not about windows or enormous uncleanable surfaces, but cutting parts of the landscape to be framed… And in silence, as if it was years since it was built. 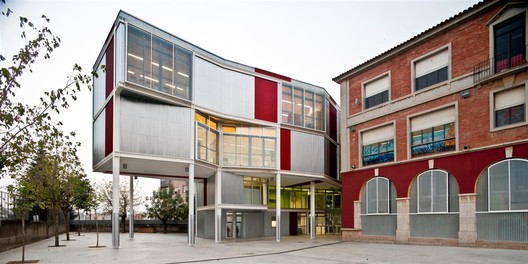