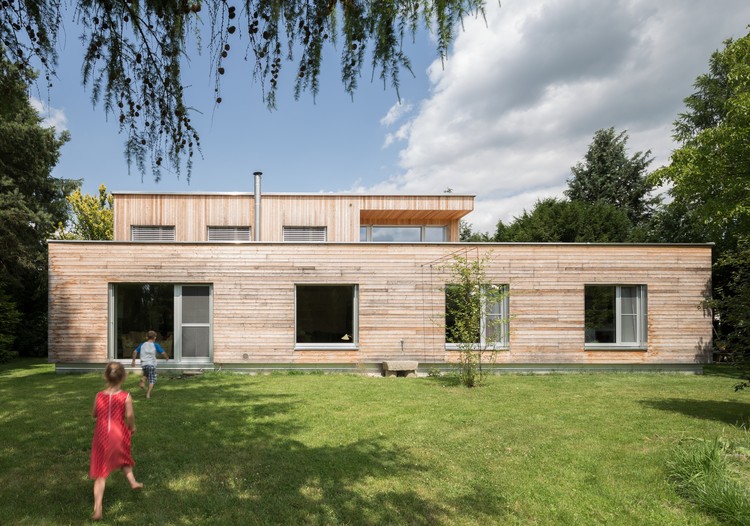 Text description provided by the architects. The single-storey house erected in the sixties, imbedded in a densely planted plot, was due for revamping and major repairs. The list of requirements stated by the client, in addition to a renewal of space distribution to meet the actual daily needs and functions, also called for a complete thermal revamping and redesign. In order to adapt the existing building to these requirements, the ground plans had to be redesigned as well as the window openings enlarged, thereby admitting more daylight to the dwelling areas, creating a direct reference to the free area outside.

The old saddle roof was dismantled and replaced by a second, recessed upper storey. This newly added structure contains the bedrooms with direct access to the terrace created by the flat roof, which replaced the abandoned saddle roof. From this point opens the magnificent unhampered view of the surrounding natural landscape.

An unobtrusive structural shell gives the impression of being extremely compact, an impression that is actually reinforced by the untreated larch wood facade. An ingenuous interplay of horizontally and perpendicularly placed façade boards reflects the different proportions of ground floor and upper storey. The wooden façade, as in many farming buildings, stands for a close proximity and interplay with the dense natural area around it.

By providing a ‘base’ or ‘pediment’, the building actually appears to float above the plot without in the least interfering with the surrounding natural space. On the level of the garden,  densely planted trees  provide the feeling of intimacy and being protected. The same effect is achieved for the upper storey by the recessed part of the building. 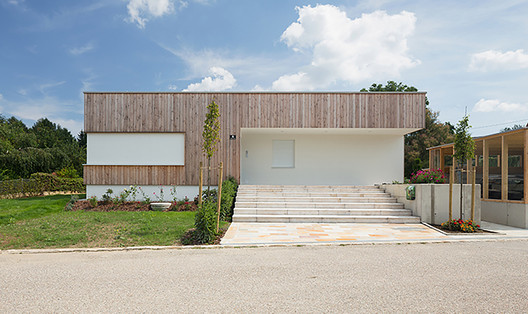