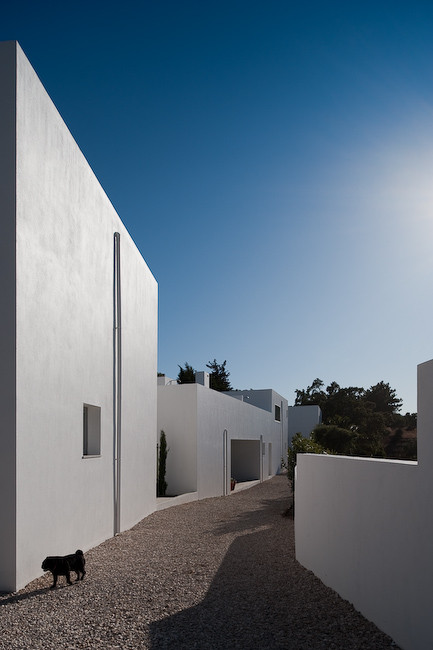 Text description provided by the architects. The intervention that is proposed is located within the urban perimeter of Aldeia do Meco. It is a narrow strip towards sunrise / sunset, flat up to about half of the land and thereafter acquiring an pending until the river bordering the west. The settlement program includes the construction of three houses, two for rent and a residence for the owners.

The first two houses are grouped together (casa 1 and casa 2) on the flat part and closer to the street and settled the other house (casa 3) on the ground to the west. 3 This house adapts to the topography, adjusting to the presence of existing trees, and enjoying the views through a system of terraces that extend the house outdoors. Unlike casa 3, casa 1 and casa 2, more exposed to neighboring buildings, enjoy a more intimate relationship generated by a system of courtyards.

Important starting point was the impossibility of any sophistication constructive opting for current building systems. The banality of the building grew into a minimal architectural lexicon composed of white unequal volumes, but similar in nature. This game was complemented with the austerity of the chosen materials.