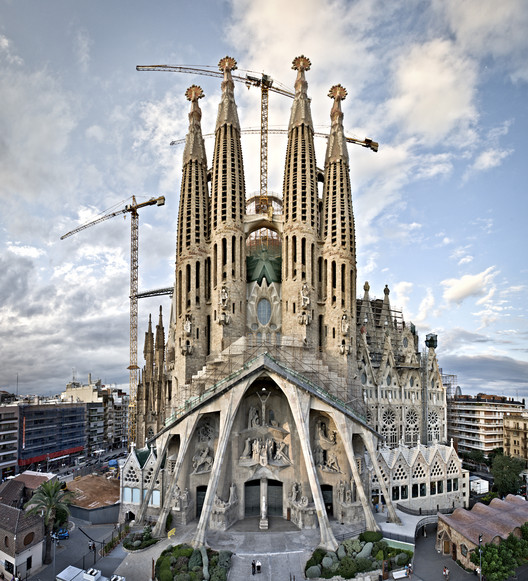 Gaudi was appointed architect in 1883 at 31 years of age, following disagreements between the temple’s promoters and the original architect, Francisco de Paula del Villar y Lozano. He maintained del Villar’s Latin cross plan, typical of Gothic cathedrals, but departed from the Gothic in several significant ways. Most notably, Gaudi developed a system of angled columns and hyperboloidal vaults to eliminate the need for flying buttresses. Rather than relying on exterior elements, horizontal loads are transferred through columns on the interior.

La Sagrada Familia utilizes three-dimensional forms comprised of ruled surfaces, including hyperboloids, parabolas, helicoids, and conoids. These complex shapes allow for a thinner, finer structure, and are intended to enhance the temple’s acoustics and quality of light. Gaudi used plaster models to develop the design, including a 1:10 scale model of the main nave measuring five meters in height and width by two meters in depth. He also devised a system of strings and weights suspended from a plan of the temple on the ceiling. From this inverted model he derived the necessary angles of the columns, vaults, and arches. This is evident in the slanted columns of the Passion facade, which recall tensile structures but act in compression.

Gaudi embedded religious symbolism in each aspect of La Sagrada Familia, creating a visual representation of Christian beliefs. He designed three iconic facades for the basilica, the Glory, Nativity, and Passion facades, facing south, east, and west, respectively. The sculpting of the Nativity facade recalls smooth, intricate corbelling and was overseen by Gaudi. The Passion Facade is characterized by the work of Josep Maria Subirachs, whose angular sculptures extend the modernist character of the temple. The sculptor Etsuro Sotoo is responsible for the window ornaments and finials, which symbolize the Eucharist.

The central nave soars to a height of 45 meters, and is designed to resemble a forest of multi-hued piers in Montjuïc and granite. The piers change in cross section from base to terminus, increasing in number of vertices from polygonal to circular. The slender, bifurcating columns draw the eye upward, where light filters through circular apertures in the vaults. These are finished in Venetian glass tiles of green and gold, articulating the lines of the hyperboloids.

Even as construction continues, older portions are undergoing cleaning and restoration. The temple has relied entirely on private donations since its inception, and has seen many delays due to lack of funding. A particularly significant setback occurred during the Spanish Civil War, when Gaudi’s workshop was destroyed, including much of the documentation he left behind.

Subsequent generations of craftsman and architects have relied on the remaining drawings and plaster models to advance the project, adhering to Gaudi’s vision as closely as possible. As a result, the design of the temple is a collaboration spanning centuries. Gaudi himself viewed the project as the collective work of generations. "I will grow old but others will come after me. What must always be conserved is the spirit of the work, but its life has to depend on the generations it is handed down to and with whom it lives and is incarnated." [1]

In recent decades, La Sagrada Familia has adopted contemporary digital design and construction technologies. Architects and craftsmen use Rhinoceros, Cadds5, Catia, and CAM to understand the complex geometries and visualize the building as a whole. Plaster models are still used as a design tool, now generated by a 3-D printer to accelerate the process. A digitally rendered video was recently released showing La Sagrada Familia's expected appearance upon completion. 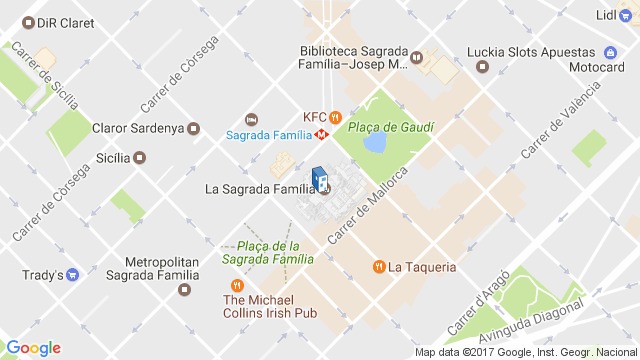