✕
Save
ReForm of Garden / SPACESPACE 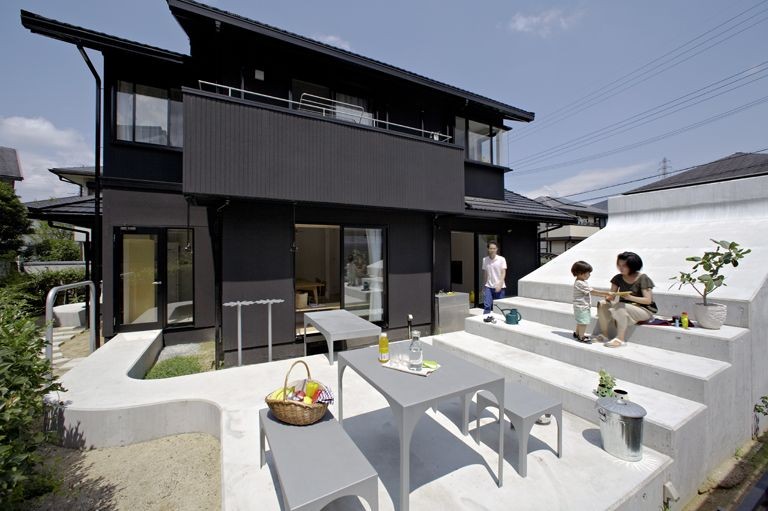 Text description provided by the architects. More than half of the southern garden was used as a parking lot with illegal car port, and there maining of it fell into ruin at first. Then, we stacked the garden and the parking lot at the same planar position by laying a concrete plane which is the roughly same size as living space, and lifting up the part of it to use its downside as the parking lot. The terraced overlap part comes up to 2nd floor level, and makes vertical relation ship with the existing house.

For instance, a high wall of high class residential area gives expression to the distrust of the residents who live there. These elements have many important messages to the city.  We attempted to change the appearance of the house and the interior movement by designing some small elements. The appearance of the house will express the intension of residents requiring the trust and communication to their neighbors.

This site is situated at a residential area in Ikoma-city, Nara where is little colder in winter compared to the inner-city of Osaka. But it shares a border with Osaka and the residents can commute in only 30 minutes, so it functions as a bedroom suburb of both Osaka and Nara. This area is a typical suburban residential area of Japan and designed to satisfy the orthodox practices of city planning. The inner road and the building distance are wide enough and each house has the southern garden.

Additionally, this concrete plane is linked to kitchen and living through each independent passageway, steel out door furniture is put on, and used as outdoor living on sunny days. Some passageway is made along other adjacent sites. They form the communication with neighbors as well as the plane.

Now that someone looks carefully, each house constructed by a major house maker has a different design, but the whole town was developed in a short period of time, therefore, homogeneous cityscape covers the area. Additionally, these houses are built with LGS (light- gauge steel) components developed uniquely to lower their construction costs. But this isolated methods includes the peculiar application for building confirmation, so it doesn’t have the flexibility to change its exterior volume and the position of columns.

1st floor composed of some small rooms was converted to a big one-room. Some revealed LGS columns were furniturized by attached some functions (shelf, hanger, light, clock and measure). Some windows were also furniturized as benches and tables.