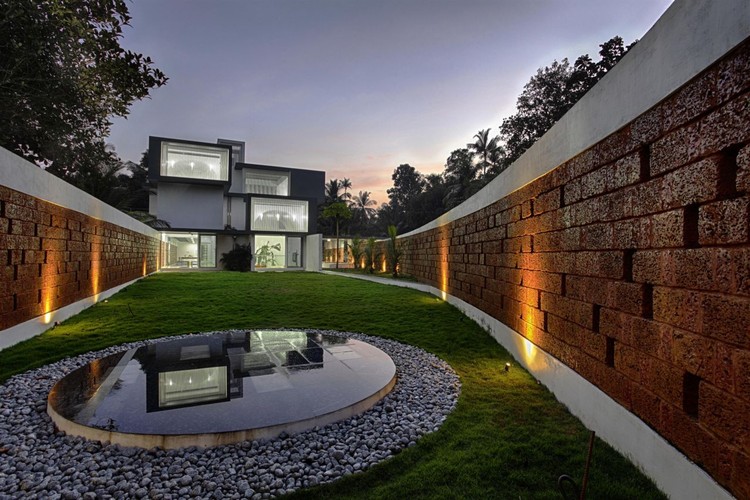 Text description provided by the architects. The brief from the client was simple and short “a fort like house that one can’t scale”. As the site sat right in the middle of one of the rougher districts of Kerala the client wanted a house that looked intimidating. In fact that is the very feel that one gets as one stands outside trying to get in.

The form is a combination of plastered walls and exposed laterite wall. Laterite stone, once commonly used in Kerala architecture, has a direct visual appeal and a connection to the immediate surroundings, because of its earthy colour and tecture. The usage of this familiar stone in a new language, without losing its inane nature, would immediately root the design, at the same time, acknowledge the presence of a change, bridging this huge gap that has come about in the contemporary architectural practice that prevails in the state now.

The exposed laterite stone wall starts from the compound wall and winds through the landscaped yard into the building. More than as a wall or as an enclosure, it is like a flowing sculpture through the landscape. The monotony of the huge walls is broken by the various voids given at random on the laterite wall. The laterite stone was sourced from two different quarries for the two distinct colours that from a pattern throughout the wall .The vertical joints between the laterite stones were filled with a paste of white cement and powdered laterite stone, thus visibly accentuating the horizontal lines. The continuous horizontal lines give more fluidity/direction to the meandering wall.

The long drive way leads one to the sit out from where a sneak preview is given of hidden courts and landscaped spill out areas. From here one steps onto a clear glass bridge, over a water body that spills out as a cascade below the main door into an internal pool. So as the main door is opened one continues to walk on the clear glass, with the visual of the cascade below the feet. From here one can choose to go to the living or the dining, both these rooms opening out into a huge landscaped, spill out area enclosed by the meandering exposed laterite wall. The dining has a long lap pool with a corridor leading one to the bedrooms. The kitchen also lies just beyond the dining. The kitchen too opens up into another landscaped yard at the back with a badminton court.

The 3 storey high internal court with banana plants, ferns and many tropical plants, has the stairs taking one into the home theater below and the study above. The corridor above has several circular skylights competing with the circular ceiling lights to light up the area.

Most of the rooms have a play of levels with the ceiling, in the form of a combination of barrel vault and flat slab at the higher level with vents to expel the hot air. This combination has brought a marked difference in the room temperature compared to other regular forms.

Each and every bit of the site was considered during design and as a result it’s heartwarming to know that each of the members finding the various levels and areas in the house a new function and a new meaning.