Text description provided by the architects. The archaeological site of the ancient port, located to the rear of the Vieux-Port de Marseille, offers material proof that the city’s Greek origins reach back to 600 BC. In 1967, during development works carried out on the Bourse district, archaeological excavations revealed the ancient port of Marseille alongside a necropolis and ramparts dating back to the Greek period, a wharf, a freshwater basin and a paved passage from Roman times. A museum was integrated into the garden level below the shopping centre and opened to the public in 1983.

The project for the renovation and enlargement of the museum launched by the Marseille authorities concerned the spatial restructuring of a 6,300 square metre surface. This incorporated 3,380 square metres of permanent exhibition space enlarged over two of the three levels of the unoccupied base of the Centre Méditerranéen du Commerce International (CMCI) positioned along the north side of the site.

Visitors now have a choice of two entrances to the museum: one giving onto the upper reception area and museum shop from the main shopping centre gallery, the other in the lower reception - ticket counter area reached from the shopping centre pedestrian access route linked to Rue Henri-Barbusse to the south of the site. This second garden level hall, connected to the first by staircase and lift, gives access to the archaeological garden, the entrance to the permanent exhibition rooms, temporary exhibition rooms and auditorium. This unlikely cohabitation between a museum facility and a shopping centre represents a tremendous opportunity for the museum as it will draw in new visitors given its greater visibility from the shopping centre.

Nor should it be forgotten that the ancient port and the shopping centre are both central points for the exchange of merchandise. The archaeological site is an exceptional object in its own right, positioned in the heart of the museum layout.The façade enclosing it on three sides detaches it from its architectural environment (Bourse shopping centre, CMCI, tower blocks) and gives the museum complex a high level of visibility.

The pedestrian access route positioned on the existing urban level (CoursBelsunce, Bourse shopping centre) has been renovated and incorporated into the museum. It has become the main access and overlooks the archaeological garden, much like a wharf raised over the water and serving the various port functions.From the inside, the new access route façade seems to place the garden in a display case, allowing its mysteries to be better seen and understood. 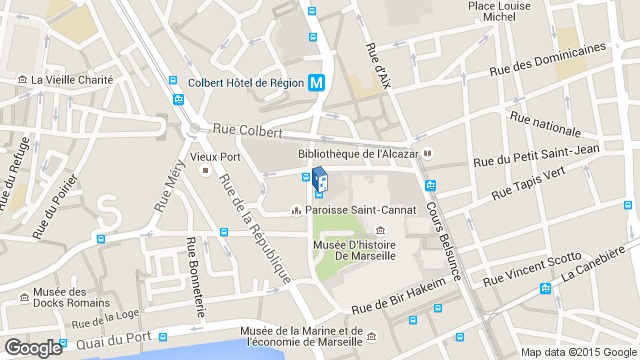