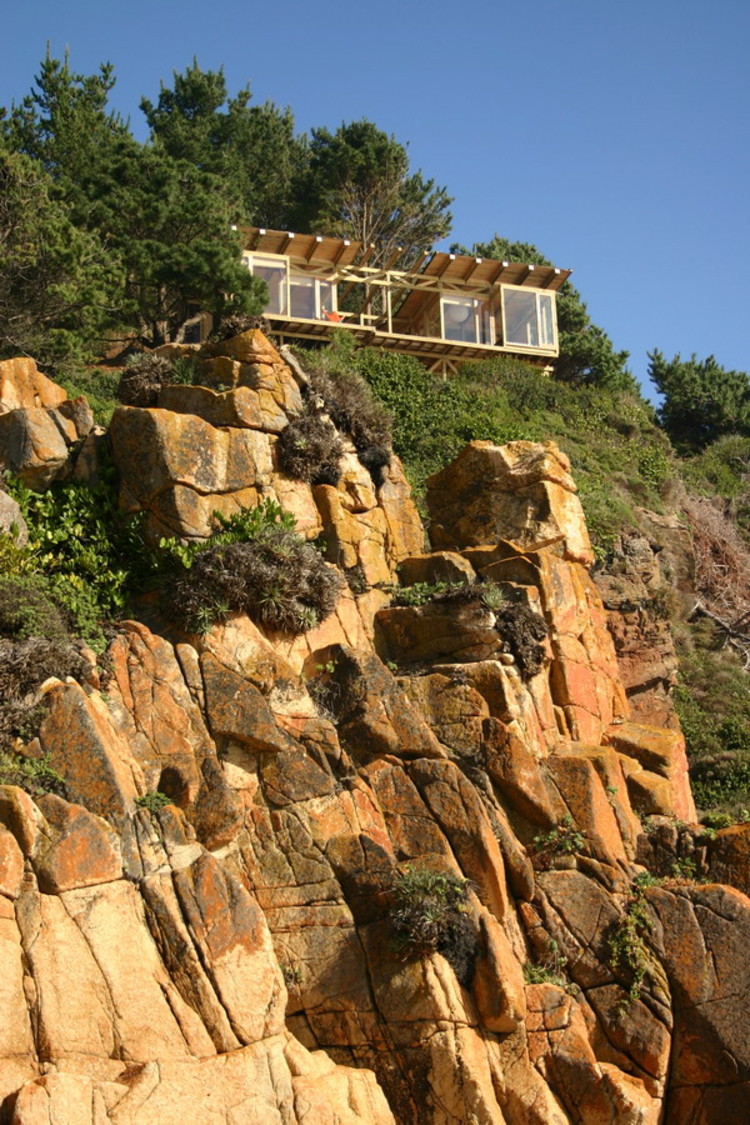 This small house is located in a remote tip of the south-central coast of Chile, specifically in Buchupureo, in the VIII Region Bío-Bío. The project is developed in a dialogue with its environment, either due to the material used, due to the spatial development, as well as the way it is implanted at the site. The house sits on a steep slope on pilotis, which lessen the project intervention on the ground, while allowing the free course of the waters.

The house develops three spatial situations that respond to the acts of resting. A room with bathroom, a space that gathers the living room with the kitchen, and a terrace in the middle as the hinge of both. All spaces seek the panoramic view of the Pacific Ocean. The terrace serves as a hall, it is proposed as an intermediate space since it is located between two interior spaces, it provides wind protection and allows cohabitation in the extension of the ocean.

The structure is almost entirely exposed, setting the shape of the house. The structure is comprised of local wood (pine), the pine partitions are treated differently depending on their role. For the structure of pillars and beams, we used 4 "x6", 2 "x6" and 2 "x5" pieces. All were impregnated for protection against moisture. For interior finishes, ¾ "x4" brushed pine was used, without any treatment. Finally, for exterior finishes, we used a tongue and groove 1" x 4", which was painted with carbolineum.

The tectonics of the project establishes a close relationship with the local architecture, using wood and stone as predominant materials. (Most of the fences in the area are built with stone walls and mud, as well as the bases of many old houses).

The roof structure is made of wood, designed as a slightly folded plane, which is detached from the structure of the walls, leaving their light reflected inside, generating a sense of spaciousness. The stone was used to cover and protect the roof, in turn it was thought of as an element of adaptation in cultural (architecture of the place) and natural (landscape elements) terms.