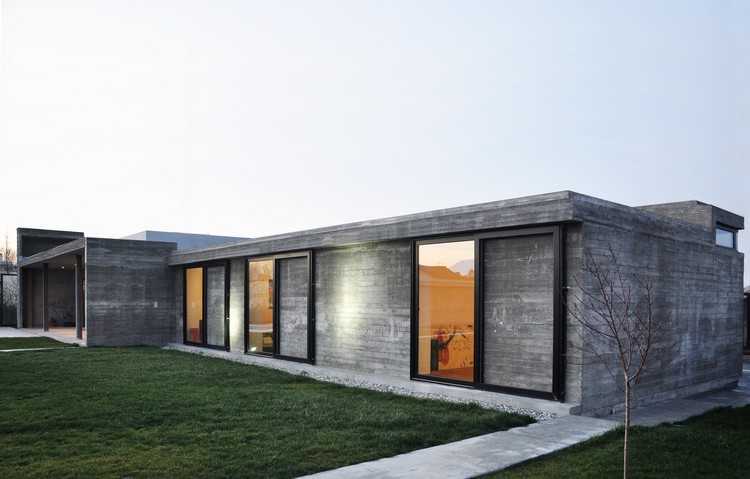 Text description provided by the architects. GD house is located in a prestigious neighborhood of single family houses near Skopje. Its concept was defined by the conditions of the site and the program, requested by a couple with two children. It contains: a parking garage, a main house (with 3 bedrooms, a living room and a dining room, a studio, a closed kitchen and a big library), a swimming pool and a guest apartment (with a small fitness area).

1. The site
The site is approximately 2000 m2. It is a sort of rectangle with 40m on one side and 50m on the other, surrounded with ugly architecture. One of the main issues was organizing the plot in a way to form an introvert world secluded from the surroundings. It was decided to place the volumes (built and vegetation), along the perimeter, creating a big courtyard in the middle, to which the main functions of the house open. In the north and the west side it was positioned the house program; the south and east side become a mirror image of vegetation volumes enclosing the courtyard. Each side of the house offers a different level of privacy and relation to the outside space.

2. The architectural layout
As a sort of landscape, the architectural layout is generated by a serious of bands with east-west direction. Different ceiling heights characterize the various ambients of the house.
Starting from the north:
- The first band contains the main entrances, the pedestrian path and the car ramp leading to the underground parking garage.
- The second band contains a big library and the main path distributing the various ambient of the house (it functions as a thermic buffer from the cold air of the north)
- The third band with two different heights, emphasizes the distinction of the night zone from the day zone.
- The fourth band is a big open terrace framing the courtyard.
- The fifth band is the guest house.
Two closed volumes complete the composition: the kitchen box and the open-air fireplace.

3. The Materials
The materials that are used are part of the Macedonian local culture and consolidated building techniques. It was decided to use row concrete as a reference to the Macedonian most brilliant period in modern architecture, made by Kenzo Tange (after the terrible earthquake in the 1963) and the architecture of its Macedonian followers. It's the material that distinguishes as form other European capitals and still constitutes our urban landscape. The concrete has been cast on site, revealing a sedimental character of the material. The house’s outside appearance is enigmatic, entirely different from the houses in the neighborhood. The closed cubic forms with a street facade made of row casted concrete reveal nothing of the luxurious world inside. Only by entering the house, through the heavy wooden gate, one gets into an entirely different inner world – an oasis of tranquility, a living space that is generous and open, where inside and outside merge into each other. 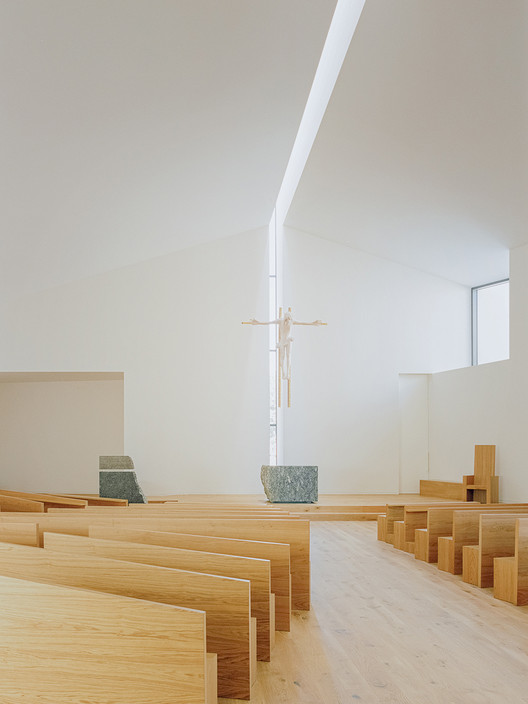