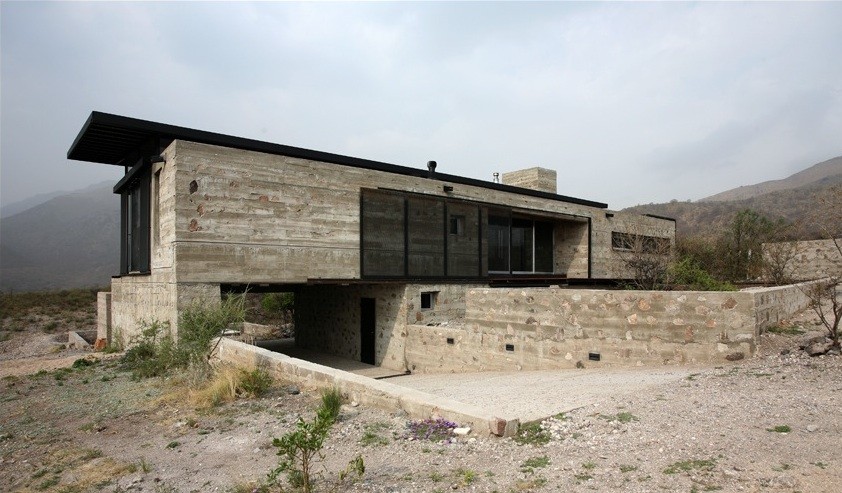 The direction of the gaze builds the landscape, of the evanescent magma of time and space, capturing its own territory for a moment, the act of looking is like building, it is never naive and innocent, there is always a cultural dimension that supports it, a time bias that identifies it, it serves as a mechanism for selection and assembly, which soon turns to memory, the reservoir of existence, and that is when the landscape becomes subjective and manipulable, relational and evocative. Every landscape is passing, or rather, the projected gaze returns us the assurance of being ourselves momentary passengers in the landscape, this conviction gives us ubiquity and temporality in traffic. Every landscape is perishable, like the carrier of the gaze. Precisely for this reason, the landscape is revealed to us in an instant as deeply human.

Traversing the landscape, the project for this house attempts to develop this argument, inducing a daily communion of its inhabitants with the surrounding environment. They are a couple who usually lives in Buenos Aires, but who slowly want to leave their residence in the city and settle in the peace and quiet of the mountain village.

The layout of the project takes place around the dominant presence of Uritorco hill, in the foothills of the Sierra de Punilla. The views and orientations led us to define its siting and materiality. Basically, a heavy prism of cyclopean concrete, which on the sloping terrain accommodates two floors, the lower or basement contains a double open garage that serves as an extension to the grill and pool area, together with an independent guest room. The lower floor is composed as a base, at the same time raising the position of the main areas of the house. Above the base is a wall with all the domestic services: kitchen, bathrooms, dressing room, service courtyard and main entrance, built with a rustic technique that alternates exposed concrete and cyclopean concrete, the basement and the services wall frame and accommodate the main rooms. Over the heavy walls is a light steel structure, which addresses the basic modulation of the project, dependent on the optimization of the profiles: 1.50m in the longitudinal direction, 1.20m in the transverse direction. Enclosed in natural aluminum frames, it defines the perimeter of the living room, dining room, and master bedroom, these are placed in direct relationship with the landscape, which is pervasive and produces atmosphere variations according to the changing color of light throughout the day and year. To enhance the relationship of the house with the ambient light, the sloping roof is always separated from the concrete walls through a perimeter carpentry, while extended above windows and walls, forming a separate plane which gives rise to a gallery to the northwest and eaves on the other sides.

To confer security and shade for the large glass panels, sliding shutters were designed with heavyweight metal, which together with the metal structure, provide consistency and a certain subtlety that contrasts with the rusticity and imperfection of the concrete finishes.

At the entrance, concrete walls are combined with a "palo a pique" technique, common in the construction of pens in the mountains, with the exception that all those trunks were extracted from fallen trees, or trees washed away by the high tides of the rivers. Without chopping a single tree, this was a task undertaken by a local guide and friend: Barnabas Leal.

In the main void inside, there are two sculptures by artist Hernán Dompé, which intensify the space with their geometry, the analogy of the outdoor rough landscape.

Finally, we can say that certain principles of containment, material, and formal austerity defined this work, with the expectation that time will allow to amalgamate it without aggression or stridency to its site, until such time comes, as an award, when it will go unnoticed, to become one more component of the landscape that hosts it. 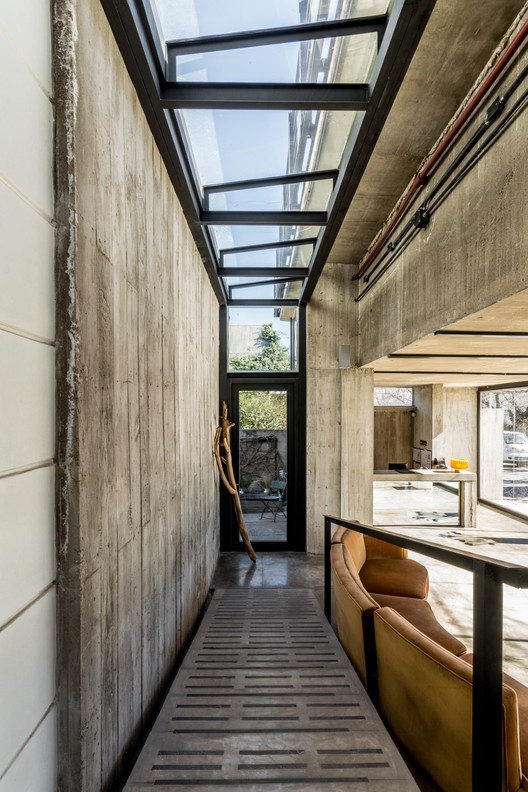