We will be publishing Nikos Salingaros’ book, Unified Architectural Theory, in a series of installments, making it digitally, freely available for students and architects around the world. The following chapter, part one of Chapter Two, outlines the scientific approach to architectural theory. If you missed them, make sure to read the introduction and Chapter One first.

(2) predicts effects that appear under specific circumstances; and

(3) enables one to create new situations that perform in a way predicted by the theory.

In architecture, a theoretical framework ought to explain why buildings affect human beings in certain ways, and why some buildings are more successful than others, both in practical as well as in psychological and aesthetic terms.

One important requirement of an architectural theory is to coordinate and make sense of scattered and apparently unrelated observations of how human beings interact with built form. Another is to formalize those observations into an easy-to-apply framework that can be used for design.

Sadly, architecture is only now embarking on a long-overdue formulation of its theoretical basis. It is not an exaggeration to say that up until now, the field has been driven by personal whim and fashion rather than being supported by any theoretical foundation. As a result of a serious misunderstanding (due to scientific ignorance by three generations of architects), a voluminous body of writings has been mistaken for “architectural theory”, even though it is nothing of the sort. This material is taught to architecture students, and is studied by practicing architects; nevertheless, it merely serves to promote certain stylistic fashions and dogmas rather than an understanding of architectural form. Enough genuine architectural theory now exists to form a nucleus from which the topic can be built. This nucleus consists of the writings of Christopher Alexander (Alexander, 2001; Alexander et al., 1977), Léon Krier (1998), the present author (Salingaros, 2006), and a few others.

Here, models from biology, physics, and computer science are used to explain how architectonic form emerges, and why human beings react in certain predictable ways to different structures. The scientific approach is in many ways complementary to the traditional approach to design. The main difference in practice is that, since the scientific approach is not tied to any specific typology, it leads to a much broader design vocabulary than does the traditional approach.

This regrettably happens because in architecture, there is as yet no basis for judging between a true and a false theory. Other fields were able to develop their theoretical basis only after they instituted such a criterion, putting in place a mechanism for distinguishing sense from nonsense. Architects erroneously believe that such a set of criteria can exist only in an experimental subject such as physics, without realizing that architecture is itself an experimental field. The problem is that the observational, experimental side of architecture has been willfully neglected for several decades, to the point where its practitioners have forgotten this fundamental quality of their discipline.

Outsiders (which includes most people) naively assume that contemporary architecture possesses a theoretical basis, like for example chemistry and neuroscience, which explains why buildings ought to look the way they do. However, a mass of writings mislabeled as architectural theory only helps to generate and support certain images; those images are then copied, and used as templates for buildings in an alien style. That is not a theoretical foundation. Those writings fail to satisfy any of the accepted criteria for a theory in any field.

Every discipline has a store of knowledge accumulated over time, which explains a huge range of phenomena. (Architecture has been collecting information for millennia). Some of this knowledge is codified into a compact theoretical framework; other parts are strictly phenomenological but tested by observation and experiment. Facts and ideas combine in a particular manner, common to all proper disciplines.

The crucial characteristic of a valid theoretical framework is a transparent internal complexity coupled with external connectivity. This arises from the way explanatory networks develop in time:

1. More recent knowledge about a topic builds upon existing knowledge.

2. Older knowledge is replaced only by a better explanation of the same phenomenon, never because a fashion has changed — this process creates multiple, connected layers of knowledge.

3. A theory in one discipline must transition sensibly to other disciplines.

This means that there ought to be some interface where one discipline merges into another, all the way around its periphery. Any theory that isolates itself because it is incomprehensible to others is automatically suspect. A tightly-knit internal connectivity, along with a looser external connectivity, provides the foundations for a mechanism of self-correction and maintenance. This holds true for any complex system.

Architecture as a profession has repeatedly disconnected itself both from its knowledge base, and from other disciplines in an effort to remain eternally “contemporary” (the much-publicized recent connections to philosophy, linguistics, and science notwithstanding, since they are now exposed as deceptions). This is, of course, the defining characteristic of a fashion; the opposite of a proper discipline. Again and again, architecture has ignored derived knowledge about buildings and cities, and has embraced nonsensical slogans and influences.

Those who profit from the instability and superficiality of the fashion industry are deathly afraid of facing genuine knowledge about the world. It would put them out of business. Architects and critics periodically change the reigning fashion so as to keep the market stimulated. They have to devote an enormous amount of resources to promoting whatever ephemeral style is in vogue. In order to sell their fashion, they are obliged to suppress any application of accumulated architectural knowledge. This prevents a theoretical basis from ever developing. Ever-changing fashion is parasitic on timeless processes.

Critics dismiss neo-traditional buildings as facile copies of classical prototypes, even though those need not resemble anything built in the previous two millennia. The architectural media declare that “a classical column represents tyranny”, and that by confessing to an attraction to classical architecture, we somehow support totalitarianism. At the same time, a liking for non-classical vernacular architecture of any kind is ridiculed. In this instance, we are branded as being ignorant and “sentimental” (which, in contemporary architectural values, is an unforgivable offense). Novel buildings with human qualities, which nevertheless have nothing to do with the classical typology, are also forbidden.

People are now misled to believe that the “architecture of the future” is necessarily broken and twisted, and made out of glass and polished metal. Any doubt is dispelled by awarding their architects the most prestigious prizes. Some of those who participate in disseminating this style act from an almost religious conviction. They fervently believe that they are doing civilization a favor, promoting the future and protecting us from backwardness and retrogression. Architectural schools are steeped in righteousness. Ever since the Bauhaus of the 1920s, many schools’ aim has been to restructure society for the betterment of all people; whether those welcome this or not. If ordinary people are sentimental about past methods of design, and crave buildings that appeal to the human scale, that is only an indication of human weakness.

We stand on the threshold of a historic architectural reckoning. A new architecture mixes exuberant curved forms and fractal scaling with the broken forms of deconstruction. Let me suggest that architects who wish to be contemporary ought to drop their deconstructive baggage. They should instead extend a hand to those whom they have formerly disdained and slandered — I mean the traditionalists, and those innovative architects who respect human scale and sensibilities. By mixing novel forms with typologies that have undergone a competitive selection during historical time, we can define a new architecture that is fit for human beings instead of remaining forever alien. Younger practitioners have been duped into identifying novelty with the essential “alien look” of deconstruction. Nevertheless, a new generation of architects is intelligent enough to realize what is going on, and to snap out of an unfortunate deception.

Order the International edition of Unified Architectural Theory here, and the US edition here.

Image of Copernicus' Theory of Heliocentrism via Iryna1, Shutterstock.com 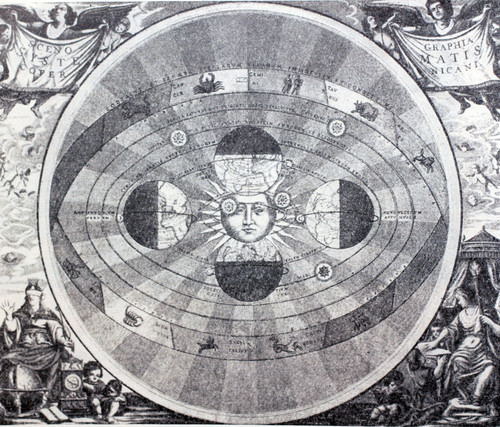