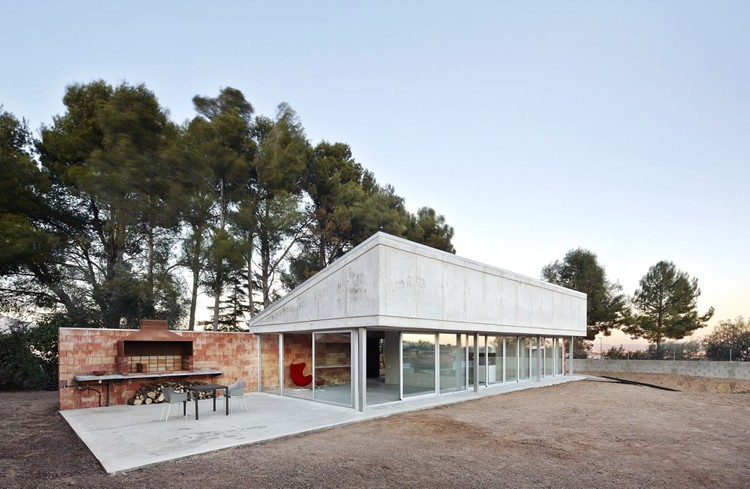 [A very well-matched elderly couple is discussing what trees to plant and where in the garden of their second residence, a small, detached, single-storey house with a barbecue as big as the living-dining room. It is winter and the house only has the roof framing in place.]

She: A cypress. That’s the tree that every Catalan farmhouse has at the entrance. Right here’s where we’re going to plant it. Then we’ll see it as soon as we come up from the street and it will welcome us.

He: Hell! Have you gone nuts? Cypresses make people think of cemeteries. Anyway, that’s where we’re gonna end up soon enough unless we decide for once and for all. Okay, come over here with me to the barbecue ... You see? Here! In this little corner of the terrace I’d plant a proper quebracho tree and not just because it’s the national tree of my dear homeland.

She: The one your mother had in her yard in Buenos Aires? That tree with thorns on its branches? No way! My grandchildren would climb up it and get pricked.

He: Don’t be so dumb! Don’t you know how great it would be here, in summer, when we’re enjoying my Argentine grills?

She: Twaddle! Look, come over here. (They go over to the frontal garden) Here I’d like to plant three pines, like the neighbour’s but in a triangle. Then we’re sure to have shade.

He: So why do you want three?

She: (Imitating his accent): What a schmuck! We gotta have three to put up the hammocks.

He: Hammocks? But we’re too old for swinging.

She: Numbskull! You swung it to me pretty well last time we were here, there in the scaffolding ...

[He’s doing an Argentine grill for her grandchildren. It’s spring and the almost finished house now only needs glass in the windows.]

He: Well, these little moneys are really something. They don’t like sweetbread, offal, innards or tripe. It’s only Catalan blood sausage for them and hamburgers. Honey! Can you bring me the chow we bought in La Boqueria?

She: Of course I can, my cowboy!

He: Meanwhile, I’m gonna get the grill ready and bring some more firewood. I’ll be back right away. (He goes behind the barbecue wall and is heard off stage) You know what? The secret of a good grill’s in the coals, so you can cook it over a nice slow fire.

She: Yes, yes, of course ... And, by the way, what did you arrange with the gardener? When’s he coming to plant the trees?

He: You should know! That dumb-ass said he was gonna call the lady of the house directly. (Whispers to himself) Money makes the world go round.

She: Sweetie, the children will be here soon. I’m setting the table here inside. He: But don’t you want to eat outside?

She: Too much sun. Maybe we should have planted your quebracho at least? (He comes back round the corner of the barbecue.)

He: You’re a pain in the butt ... Well, I’m gonna make the chimichurri and those brats are gonna down it by the spoonful.

[A hot summer afternoon and they’re about to have a nap after a paella he’s made for the housewarming. They’ll be spending the whole summer there.]

He: Shall I make some mate?

She: You’re so crazy about those herbs of yours! Forty degrees in the shade and you want mate?

He: With you, under these beautiful pines, enjoying these views, in the hammock ... there’s no better time for it. If it’d been left to you, there’d be no mate, no bedroom, no bathroom ...

She: Listen to him! The original idea was to use my land as a place for you to do your grills and that’s all. And then ... “well, yes, a little toilet. And, now we’re here, let’s have a little kitchen for cooking up other feasts”. And so on, even adding another bedroom for guests and a living-dining room. Well, what a cheek!

He: But yeah, in the end the little house has only got one wall of this whatchamacallit-clay, which we didn’t even paint because the architect kept saying it was cheaper like that. Then, after that, a concrete floor and ceiling and that’s it. Couldn’t be any simpler or cheaper. You chose the kid, didn’t you?

She: Yes. And luckily it’s always me who ends up choosing. Heaven knows what you’d do under that quebracho of yours. “Si no hi ha arbre millor que un pi mediterrani, home!” *

* The best tree of all’s the Mediterranean pine, man! (in Catalan language)