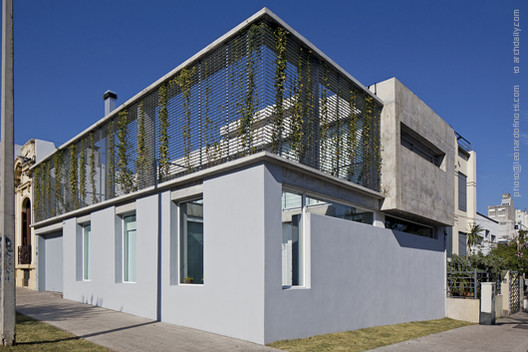 Located in "La Isla", a small stretch of strong impact on Punta Carretas residential neighborhood (Montevideo, Uruguay), where traditional houses of the early twentieth century without setbacks coexist with more recent houses setback from the sidewalk.

The house was built on the almost ruin of an old house without setbacks, on a site 140 m2. We kept a trace of the old building using the facade wall, so as to create continuity with the two boundaries. But much of the indoor environments are removed from the wall, taking advantage of the northern orientation facing the longer side of the property.

The facade sets a screen for privacy, designed on the ground floor with the rest of the original wall and on the upper level with a deciduous plant attached to a wire mesh, which generates seasonally changing conditions, and a variable image also according to the seasons and blooms.

The house was conceived as the total volume of "architecturally treated air", with intertwined interior and exterior instances, with good orientation and oblique views. The project articulates certain traditional urban qualities of the neighborhood, with its status as contemporary piece.

The meager size of the property is mitigated through continuous and interconnected spaces with a certain programmatic ambiguity: living, dining-kitchen, barbecue, garage, deck and courtyards, corridor to deck and study and bathroom, etc..

It has two bedrooms a study and playroom. According to the client's expectations, we worked the articulation of the relations between the grill and barbecue space, with the kitchen-dining room, the living room and play room. At the same time we took care of privacy for the two bedrooms, one on each level.