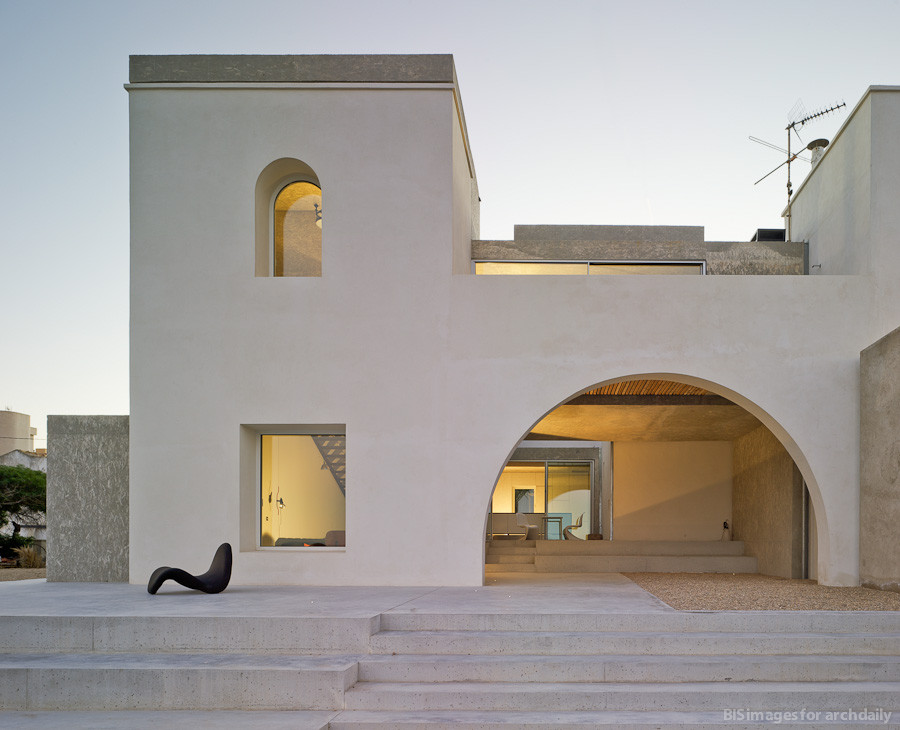 Alien is a structure that comes from within the house, as did the eighth passenger in the mythical Ridley Scott’s film

The structure appears and disappears in different “moments” transforming the interior space of a house that just keeps the old walls that defined it: stone masonry walls covered with white cement mortar

Therefore, the argument of the house is a form colonized by a structure. Since the early twentieth century this house is a consolidated form in the landscape  that is preserved and is enabled to adapt to a new way of living.We had a compact house divided into two parts and we worked only on one of them

From partition space to single space

We assume a compartmentalized house that moves towards a house formed by a single space open to the sea, so that from every space of the house you can feel the presence of water.

Inside, there are two spaces with an “L” shape, superimposed but displaced. Downstairs, day activities take place. Upstairs, we find the bedrooms and the library.

A categorical piece in the landscape

The main value of the house is the spatial sequence  that is established between the interior and exterior. This sequence is a selection of longitudinally linked spaces with very different characteristics: a garden facing the sea, terraces and an open platform , acovered and open space behind the great arch, a patio, an open and  raised terrace overturned to the patio,  a veranda on the back of the house and a garden next to it,…

This catalog of transition spaces talks about a house 100% mediterranean  where the space strategy dissolves the limits between inside and outside and between the contemplative and the domestic.

Concrete and White, Old and New

The building follows the concept. It seemed important to note the presence of new and existing through the material; in this way, ‘concrete’ builds the new parts of the house, and ‘white’; the existing walls that set up the house.