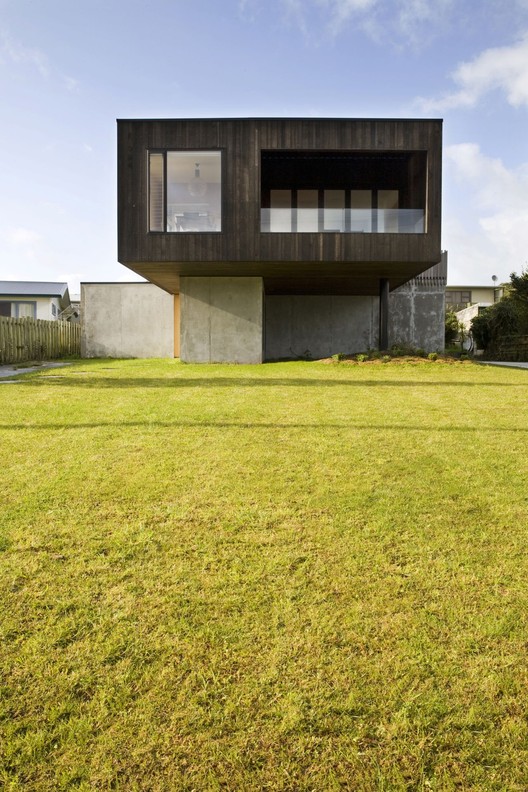 Text description provided by the architects. Previously occupied by a tiny bach, the site, across the road and one house back from the water, had great potential to make the most of the available views and sun.

Having lived in the bach for several years the client required a house that would maximise light and space, whilst maintaining a degree of privacy and separation from its predominantly “suburban” neighbours.

The brief required flexibility in the living spaces so that they could open into each other to maximize each space, or alternatively be closed down from each other creating a cozy environment.

Conceptually the house is a composition of separate forms: two black-stained timber boxes sitting on an insitu concrete plinth. This houses the downstairs bedrooms (two), bathroom/laundry and double garage, large enough to accommodate a boat.

A white veranda spans between the two boxes extending the kitchen/casual dining space into an outdoor room with open fireplace, and views of the estuary to the north-west. On the opposite side the white veranda space is expressed with the use of danpalon polycarbonate sheeting, this creates a lighbox-effect in the atrium, bringing light into the core of the house, whilst maintaining privacy.

The front box housing the living spaces cantilevers beyond its concrete plinth, inspired by the 1950’s dune hopper bachs, raised in order to see over the dunes, this appears to hang in space and in turn creates the entry below.

The main bedroom, ensuite and guest bedroom are housed in the second box situated towards the rear of the section. Raised half a floor up on their own concrete plinth, these rooms feel private, whilst maintaining a connection to the house via the window-lined walkway that links them.

The living is open-plan but with a feeling of division, so that one can in effect move from room to room within the whole, kitchen to dining to living, inhabiting the individual spaces.

A covered deck opening from the living space provides another intimate space within the whole, overlooking the more distant harbour-mouth view, this can be further opened up to the closer estuary view via a sliding shutter to the north-west wall.

The house is a predominantly white-painted space with a deliberately reduced colour palette, accents of natural materials including marine ply and strandboard in bedrooms bring the colour in, ground concrete floors and built in furniture complement the aesthetic. 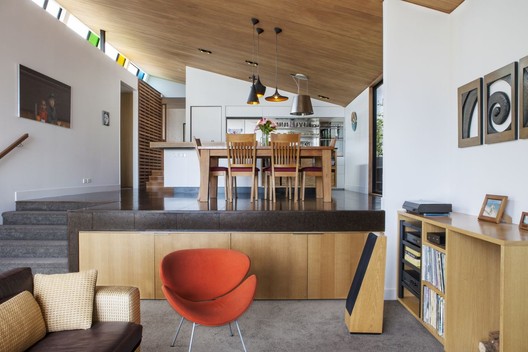