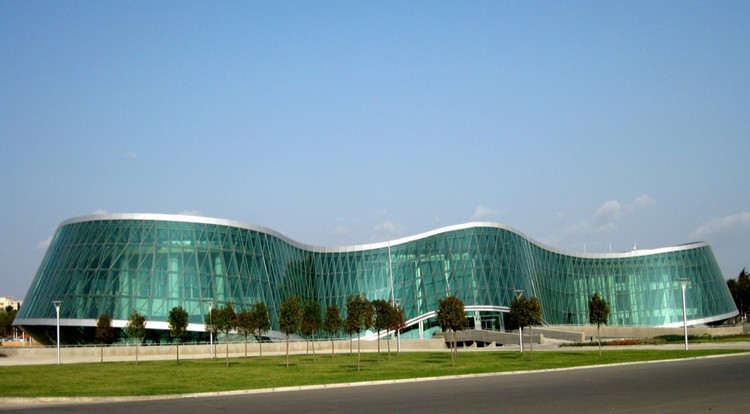 Text description provided by the architects. Ministry of Internal Affairs of Georgia building was designed within a site near the Kakheti highway between Tbilisi International Airport and city center. This building not only was designed as an official building but also as a landmark for Tbilisi and Georgia. The building has been located within a 49,652 sqm area consists of a 3,580 sqm area curvy basement and ground floor also having linear form of first and second floors. The total area of the main building is 10,579 sqm. The main building was located in the middle of the site as a little bit closer to the highway. Thus, like a ceremonial square is available in front of the main building. At the same time, a 1000sqm pool with a depth of 30 cm was designed in front of the main building, in order to reflect the facade of building by the means of water within the big pool. The main building located within a pit on the ground and rising from there has two entrances. The first one is from the front part by the means of a bridge for VIP and the second one is from north part as opposite direction for civilians. The bridge reaches to the building by crossing over a grass inclined area. VIP persons enter to the ground floor by the means of this bridge directly.

At the north part of the site an open car park for civillians/visitors and a heliport were designed. At the same time, all civilians can enter to the site by using the gate located this part. Civilians reach the main building by walking through the pathways which are among a 50 meter long green area including grass and trees after passing carpark zone. Exposed concrete stairs were designed towards the basement open area surrounding the building, in order to provide arrival to the entrance point at the basement floor from North side of the building. In this way, entrances for VIP and civilians could be arranged from different floors separately in design. A service road was designed for ambulances, fire trucks and other service vehicles at the west-south part and as adjoining to the neigbour plot of the site reaching to the basement level (-4.80). Basement open area which surrounds the building is bounded by an exposed concrete retaining wall. At the North-east side of this retaining wall, there is the front facade and entrances of a 1164 sqm construction area mechanical building as buried by top and other sides. A transformer building was designed in the green area at the north-east side of the site as adjoining to the car park. This building was designed as concealed by soil and grass as if a natural hill, in order to disappare the volume of the building from outside. This 148 sqm building includes transformers and generators and its entrances were provided from the car park area.

By opening the facade and creating a large open space around the basement of the main building in design, not only lets the sunlight and fresh air enter inside, but also creates a base for the extraordinary volume consisting of steel and glass on the top. Basement facade consists of walls and glass openings both. In order to create a base view for the basement facade, similar pattern and colour should have been used on the facade and outside ground both.In this way, by having permanence of same texture and colour for both surfaces, the base effect for the top volume would have been obtained. Therefore, while brushed concrete has been used for the outside ground but concrete texture paint used for the facade. Main building was designed as an linear form inner two storey block and an extraordinary three-dimensional outer facade consisting of glass. Only basement and ground floor was produced by reinforced concrete but all upper floors and columns were made by steel structural system.

As the opposite character of the facade, inner block has rectangular shape above from the ground floor (±0.00 level). In this way, on the ground floor a three-dimensional inner volume was obtained as atrium. This space which is between building facade and the inner block, which has 12 meter high, is used a big circulation area on the ground floor, also behaves a foyer for the auditorium and having a cafe which serves to employees and visitors. Besides, a closed open office was designed at the east side of this part. There are auditorium, kitchen of the cafe and stairs within the rectangular block on the ground floor. Inner block consists of two wings as left and right with a central large bridge for access. Upper floors have been closed by the means of a glass facade in order to prevent noise effect could be from the atrium and to highlight the inner rectangular block in design. In the first floor while minister’s and deputy minister’s rooms also their related rooms were located on the west wing, open offices were placed on the east wing. In second floor, open offices were designed on both wings. Two open stairs serve mainly to the central bridge in order to provide main vertical circulation. At the same time, three fire stairs and a special elevator for use of VIP and also handicap peds.

The facade consists of there different surfaces totally in section. First facade is the bottom facade starting from +0.00 level. The second one is the main front facade. The third one is the top part of the facade connecting the top point of the second facade to the roof slab (+12.00 level). All section parts of the facade have different angles and also different surfaces everywhere. This three-dimensional variable movement on the facade determines the characteristic of the building. At the same time, glass facade was formed by 3567 item tirangle glass pieces totally, while 1947 of them have disparate sizes from each other. Due to natural ventilation considered within the atrium in addition to HVAC system, some triangle modules on the bottom and top facade have been designed as openable windows which open synchronously by the means of automation system. At the same time, windows located on the top part open separately from bottom part, in order to provide smoke-exhaust for the atrium in case of fire. The atrium part was divided into four closed pieces by five fire walls made by steel and glass, in order to prevent any smoke transfer throughout the different spaces inside of the building.

The movement of the building facade to up and down creates an entrance point turning into an eaves at the middle of the front elevation apparent from the highway. 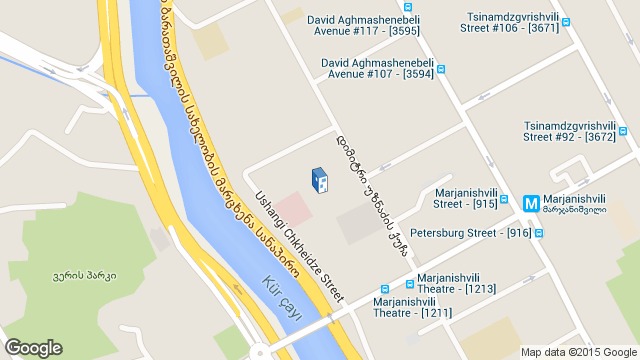 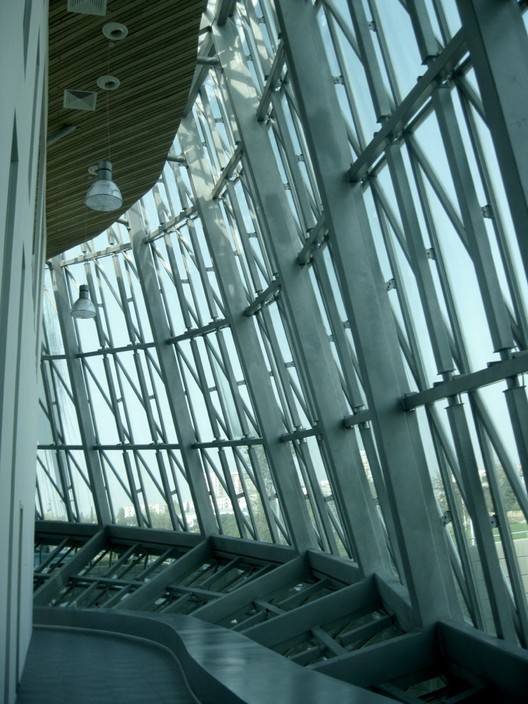 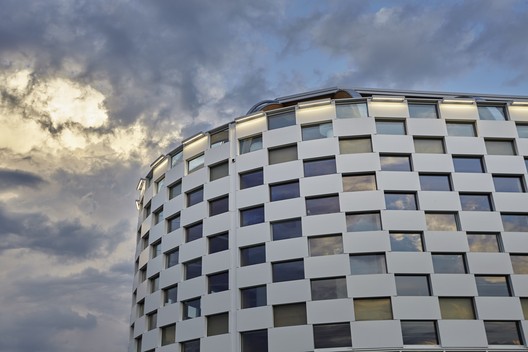 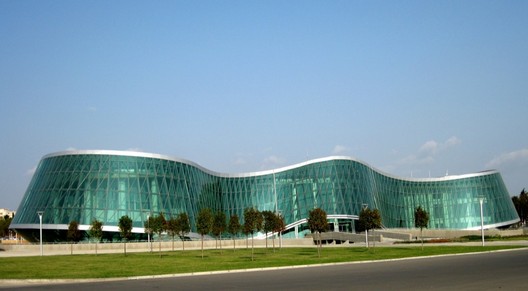