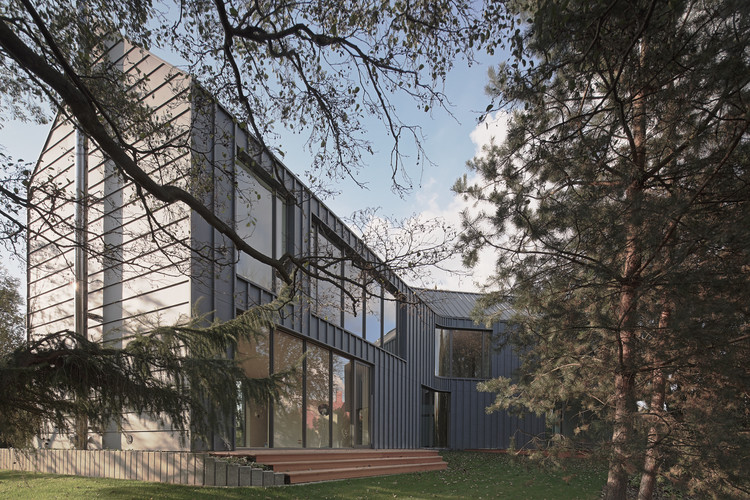 Text description provided by the architects. The residence in one of Warsaw’s Villa districts was conceived out of clients’ pursuit of unity with nature. It was supposed to become an urban refuge for the clients as well as a gathering place for their closest family. The clients - Mariola and Tomasz - are active, career-oriented businessmen. They needed an asylum for themselves, their twelve-year-old daughter and their two adult sons with their families, who would be frequent visitors of the residence. The required functionalities included: recreational unit with fitness-room and spa, home theatre with advanced home cinema, a place to throw private piano recitals and a library combined with an exhibition space for their art collection. The clients’ extraordinary requirement was for the residence to be designed in accordance with feng-shui philosophy.

The plot on which the residence was to be situated, was recessed from the main road, rich in exquisite greenery, and with a pond in one of its corners. According to feng-shui “bagua” diagram, all the functions of the house were to be distributed around the geometric centre of the plot, in line with certain feng-shui parameters specific for each of the household members. Furthermore, according to these principles, specific parts of the plot were to be excluded from the development, which had a direct impact on the shape of the building. As an effect, the plan of the house resembled a chromosome with two clear functional flows on the West and the East. These flows permeate each other in the central part of the building creating a central hall, which allows for an easy access to all of the house’s functions, distributed between two floors. This configuration reduces circulation area to the necessary minimum.

An X-shaped, fragmented plan divides the plot area into four courtyard-like parts of different functions and spatial arrangements. The wings of the house are shaped to fit the functions as well as preserve the existing greenery. As a result the trees were left growing very close to the facades which in combination with roof-to-ceiling, panoramic windows and a specific special arrangement of forms creates an impression of fluent transitions between interiors and an exterior and blurs the borders between them. The largest rooms of the house, the living room and the entertainment area are opening on two sides creating a visual link between the main entrance courtyard the pond area and the back courtyard. Their space is extended to the adjacent terraces.

The central part of the building and its superior role in the plan is emphasized on the elevations by means of smooth wall lines, bent glass walls, a thickened rhythm of vertical divisions and a double curved roof surface resultant from the blend of tangent roof slopes over the hall part. This variation of the traditional roof, allowed to highlight the geometrical and functional heart of the building at the same time fulfilling the restrictions included in the local planning regulations which imposed the requirement of a gable roof with 35-45° slopes. In order to overcome the difficulties deriving from the large span between the supporting walls as well as the complex geometry of the roof, a set of 24 unique, curvilinear, laminated wood trusses were used to cover the central part of the house.