Like many architecture students, Hank Butitta was frustrated. Frustrated that the projects he and his fellow classmates were painstakingly, time-consumingly crafting at architecture school resulted—almost always—in nothing.  But Hank Butitta, unlike many architecture students, decided that, for his thesis, he would buy an old school bus and turn it into a flexible living space. The result: a 225 square foot mobile home—complete with reclaimed gym flooring and dimmable LED mood lighting.

On his website (www.hankboughtabus.com), Butitta says, “This project was a way to show how building a small structure with simple detailing can be more valuable than drawing a complex project that is theoretical and poorly understood.” Since the project (which was envisioned with a nod to the tiny house movement) was picked up by the media last week, fans and commenters have flooded the site, asking Hank how he resolved certain problems and where he sourced the materials. 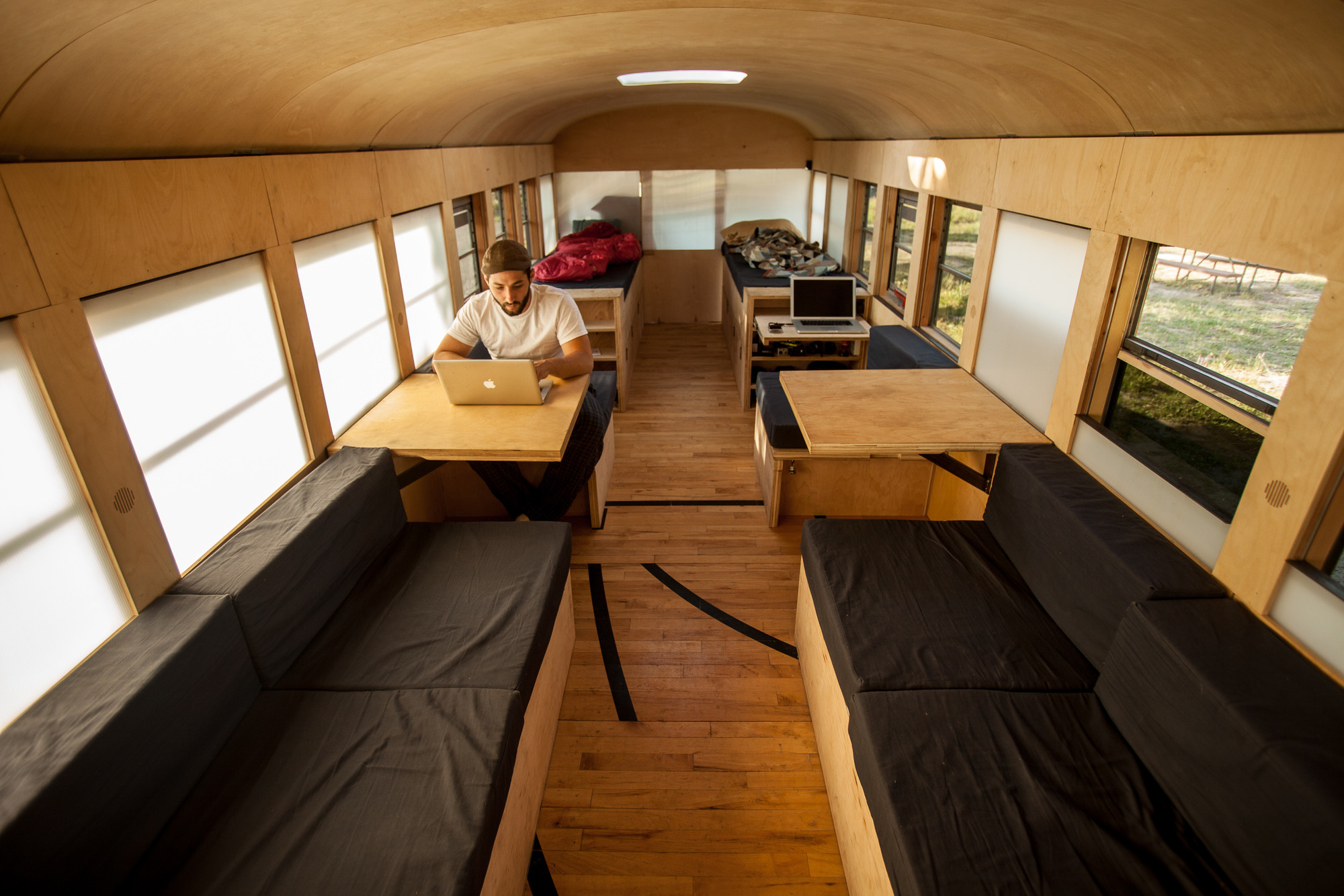 Using the 28 inch wide windows as a modular guide, the bus is divided into four primary zones: bathroom, kitchen, seating, and sleeping. The space can be configured in a variety of combinations, depending on need.

Butitta presented his revamped vehicle as his thesis project at the University of Minnesota’s School of Architecture. He graduated in a May, and then embarked on a 5,000 mile road trip (which is currently in progress).

We asked the recent grad if he had any advice for architecture students who might also want to pursue unconventional projects in school.

"After having the opportunity to be a TA, I finally realized that instructors often give guidelines just to make sure no one underachieves. The students who are interested in working outside the guidelines are often worried that they're 'breaking the rules,' and they shouldn't be. Many (most?) instructors are willing to let students break boundaries and work outside of the box as it often leads to better work. The students become more passionate about their projects, and generate more interesting work. So my advice is: don't wait for your instructors to tell you what to do, take risks, work outside the box, and do work you're passionate about. Being a little ridiculous doesn't hurt.

Also, I think it's incredibly important to iterate at full scale. Architects have an unfortunate reputation for not understanding construction. By iterating (not just modeling) at full scale, we get the opportunity to learn about material limitations and possibilities. By having a better understanding of detailing and joinery, we can improve the field's reputation, and lower the risk of a design being compromised by a detail that has to be changed."

Butitta is determined to push the project forward and has plans for another cross-country tour; he'd like to bring his bus and his story to architecture schools around the US, discussing how his project relates to the current state of architectural education and the tiny house movement. You can follow his carefully documented journey on his website.