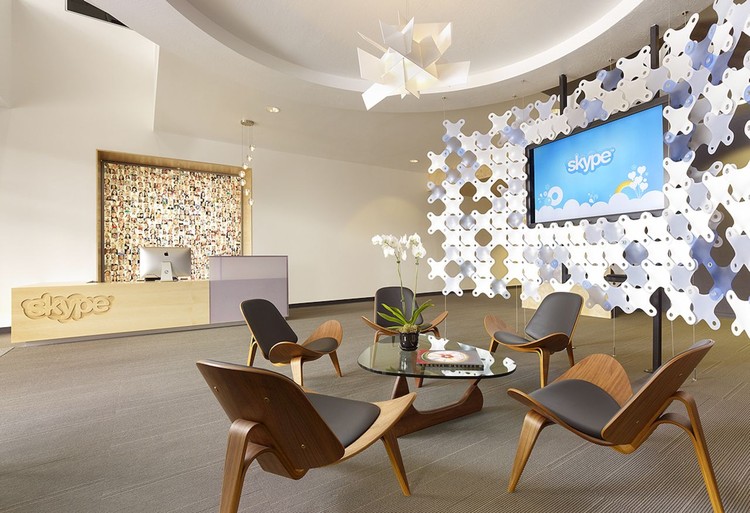 Text description provided by the architects. Skype’s primary goal was to create a world-class office that would differentiate them from their Bay Area competitors in the recruitment of talent. Their new space not only had to be a design statement that reflected their modern but fun personality, but it also had to meet very specific acoustic requirements to support the company’s extensive use of AV. Skype hired Design Blitz architects to design their new North American headquarters on an aggressive budget and schedule.

To really understand how Skype operates culturally, Design Blitz undertook extensive user-group surveying, and researched workspace typology before ever laying pen to paper. A significant portion of Skype’s culture is built around Scrum development (iterative idea generation) and a philosophy called ‘Agile Thinking’ (the affect of environment on thought process). To support Scrum, Blitz designed a system of mobile white boards called Skype-its that are distributed throughout the project. They can be easily moved and stored depending on a development team’s process and requirements. Blitz also created a multitude of different environments to support different thought processes. All of the casual meeting areas are unique and there are three distinct phone booth types: light and bright for active thought; medium colored for meditative thought; and dark cave-like rooms for introspective thought.

Like many organizations, Skype required three distinct types of spaces: collaboration, contemplation and concentration spaces. Since Design Blitz believes that people, not conference rooms, deserve natural light, the architects took advantage of the exterior windows and located all workstations at the building perimeter (concentration). They then worked their way back to the middle by degree of noise and distraction, with the noisiest functions being at the middle of the space (collaboration). Meeting rooms and phone booths were prioritized as no member of staff had a private office (an open floor plan with a benching workstation system was implemented). Contemplation spaces were interspersed in the form of overlapping casual lounges.

With such large floor plates it was important for users to be able to orient themselves. The project is organized along a central highway with various nodal meeting spaces to convey a sense of location, while also encouraging workers to literally meet-in-the-middle. This becomes even more critical given the international, transient nature of the Skype workforce.

The building itself provided the greatest source of design inspiration. It was a dark and dingy space with years of tired tenant improvement projects layered on top of one another. It stood vacant for quite some time while neighboring buildings were being leased within weeks. While touring the site, Blitz popped out a few ceiling tiles and the opportunity to strip away the layers and reveal the existing structure became immediately apparent. The architects made a decision to rip out all the existing ceilings and furring around the steel and never looked back. The resulting space is raw, industrial, and suggestive of a warehouse, which stands in perfect contrast to the highly refined meeting room pods that Blitz inserted into the open space.

The pods house the meeting and collaboration function and require a very high level of acoustic attenuation (far exceeding typical TI construction). To achieve the aesthetic of a floating pod (the pods are self-supporting) and achieve Skype’s acoustical requirements, Blitz had to develop a unique building typology. The architects utilized a structural roof deck, commonly used in large span construction, that provided them with the structural diaphragm over the pods, provided a high level of acoustic attenuation, and also functioned as the finished ceiling. This multi-function quality was a key focus throughout the project - one item fulfilling multiple functions.

With a tight budget, Design Blitz had to be creative and use simple, ordinary materials in new and creative ways. In the chill-out area they clad one wall with astroturf, and another with industrial felt. These coverings function as sound attenuation and finish materials, but also afford a little whimsy. At the Skype-it niches the architects used common 3/4” birch plywood and sized the niches to fit standard material modules. The plywood provides a high STC rating and is also the finish material. The Board Room is clad in wine flavor sticks, found at a salvage yard. These provide a unique finish to this particular pod and subtly celebrate California - an important program element for Skype.

Despite being one of several new offices this year for Skype, this project has been identified as the standard for the international communications company. It also achieved LEED Silver certification. 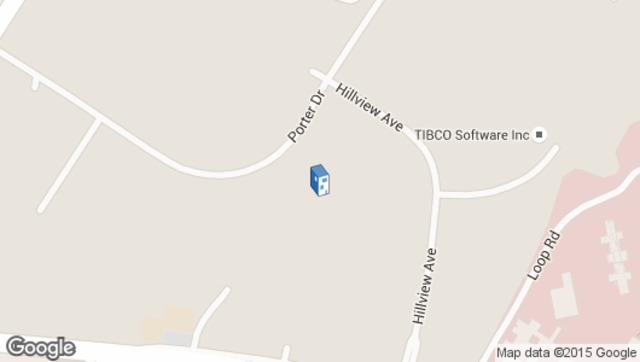