Back for its fourth year, the creative camp Hello Wood was held last month in Hungary, set in the countryside north of Lake Balaton. At Hello Wood, 120 young designers and architects worked with leading experts to create installations which approach issues of society and community in architecture, ideas encompassed by this year's motto "Step Closer!" Twelve teams had one week to create these installations using timber as their primary material, with the projects being judged and a winner awarded at the end of the week.

Read on to find out about the installations, and which one was judged the winner, after the break 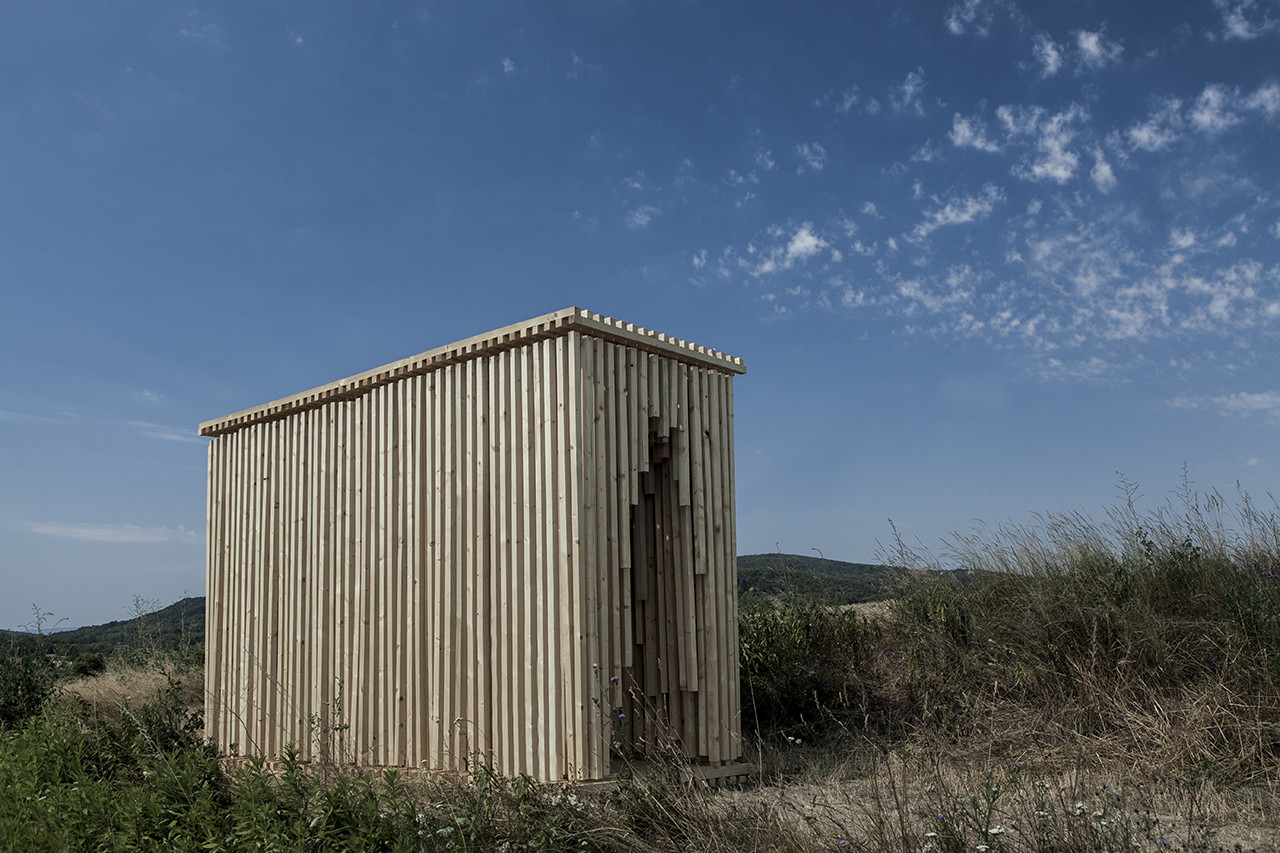 Lead by Gabor Zoboki and Andras Csiszer of Zoboki Demeter and Partners Architects, this 20 meter long passageway was constructed of linked moving parts. Making it so that users can adjust the structure gives the architecture an interactive element engaging the people that pass through it.

Inspired by the modern phenomenon of groups of people who are more engaged by their phones than they are by each other, the iWood project lead by Aron Losonczi (Litracon) and Bence Turanyi (t2a) was designed as a way for people to share music.

Designed for a specific location in the nearby village byBela Gal of KROKI Architects and Zsolt Frikker & Aron VassEysen of NARTARCHITECTS, this outdoor pub creates a connection between two streets and is intended as a permanent insertion which benefits the lives of locals and visitors alike.

Lead by Nandor Nagy and Bulcsu Szabo of BLOKK Architects, this windmill is intended not just as a utilitarian energy generator, but also a visual spectacle, highlighting issues of energy generation and sustainability into the minds of those who see it.

This structure was designed and built without screws or bolts, only using string ties to connect the pieces of timber. Lead by Oliver Sales of DOP Architecture and Bence Pap from Universität für angewandte Kunst Wien, the team worked out the structure in its entirety in an initial workshop.

The FireNEST is an elaboration on the social act of sitting around a camp fire. Team leaders Andras Cseh of CZITA Architects and Balint Veres from the Moholy-Nagy University of Art and Design wanted to improve this act by allowing more people to crowd around the fire, without anyone be excluded. The amphitheatre-like design of the FireNEST allows for multiple rows of people without anyone being blocked out.

Lead by Enrique Soriano and Pep Tornabell of CODA, this structure is an experiment building on the flexibility of wood and the strength of the toroid shape to create a structure that is lightweight but strong.

With a specialty in lightweight timber structures, team leader Holger Alpermann from the Universität der Künste Berlin was inspired by the night sky in rural Hungary, and the design of the funnel acts as a low-tech planetarium, focusing the user's eyes on the stars.

Suzana Milinovic from TU DELFT and Rufus van den Ban of HP Architects wanted to intentionally design a bar that was too small - the result was this tiny pub which forces its patrons to squeeze in together, making for a much more intimate environment than in most pubs.

The simple act of dining together was the inspiration for Tibor Dekany and Dia Harcsa of Spora architects. They created a 43-meter long table which could be adjusted to suit various dining configurations.

For this year, the guest project was given to Anna Barothy, Daniel Csomor, Gergely Kasza and David Bansagi of the Szovetseg ‘39 Art Base. Their project entitled Gallish used timber, concrete and balloons to create an intriguing and natural form with an exciting interplay between the solid form of the concrete and the cavities left by the balloons.

The winning project, lead by Tomasz Szponar and Bartłomiej Skowronek of Moomoo Architects is designed to bring users more in touch with their senses, as an antidote to the pressures of modern society which make us forget how to live an easy life. The space contains hung timber batons which give an immersive sound, smell, and feel to the enveloping space.