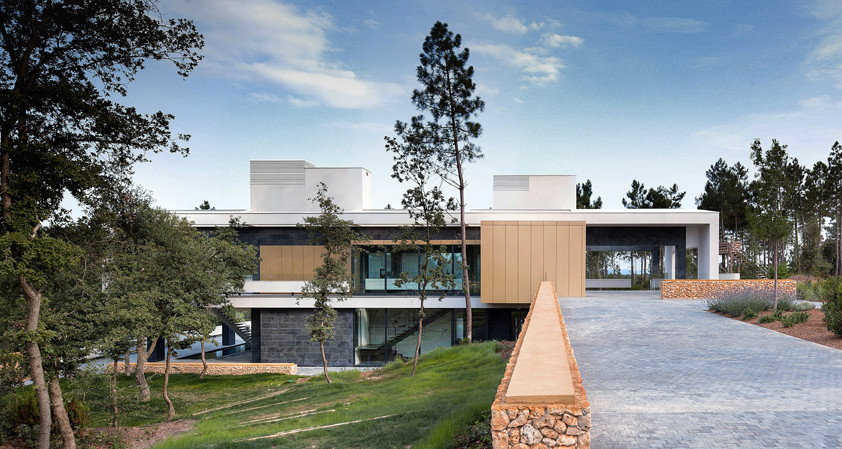 Text description provided by the architects. About eight years ago, when Lagula Architects was just the common project of a group of friends, we began our relationship with PGA Golf de Caldes. After winning a competition, we began the development and construction in association of a four star hotel in the emerging urban development of El Golf.

Jon Montero, jury member of that competition and later co-director of the hotel construction, at that time defined some initial ideas about how the architecture of that place should be. The conceptual design of the golf course should be articulated around the Mediterranean version of architecture of the modern movement, locally defined at its inception by members of GATPAC, and subsequently reviewed by the members of Group R.

With these conditions, the house in La Vinya seeks a tense balance. An equilibrium with these predefined formal requests. A balance with doubt about what should be and how one should live in a house of a certain standard. Finally, a balance with an architectural piece, especially a home, in the tension of nature and artifice that exists in a golf course.

Assuming the formal requests previously mentioned with a certain irony, the house seeks to recall the origins of the origins. Thus, even before referring to the Mediterranean modernity, the project is based on a certain Palladianism evident in the rhythm and visibility of its structural elements and access area. This is produced by introducing the vehicle directly in the house, elevated over a courtyard. Within the general framework that defines the house, it refers to both Vicenza architectures, as well as the modern tradition of the “case study houses”.

In parallel, the formal definition of the house avoids the almost Boolean criteria of modifiability of the underlying structure of some projects of white postmodernism. Under the general framework, the house is defined by its structure, ribs, pillars, beams, and edges that define open or closed spaces. Open or closed are interchangeably part of the house. This three-dimensional use of the edge allows us to empty the house over the pool, producing a triple void which decomposes the upper volume.

The organization of the program also tilts in this double origin. The program inverts its conventional structure in this type of housing. Direct access is produced through the public areas of the house on the upper level. A white frame defines the edges of these areas regardless of their degree of occlusion, permeability, and enclosure. Under it, dark and in connection with the terrain, is the bedroom area. Palladio again comes up in the inflected symmetry of the bedroom program on the lower level and in the order of the service program, volumetrically shown on the facade. By contrast, the relation of the spaces with the exterior and the layout of the pool refer to a modern use.

To design a project of this kind in a landscape of artificial nature, we use mechanisms of land art. As in a Mediterranean, massive, and textured version of Donald Judd, the building frames the landscape. An oversize chimney leans out ironically over what could be a framed sky by James Turrell.

The artificial materiality of the golf course is reflected in the retaining walls of the basement of the house. Intensity in the use of the texture of stone makes the upper volume smooth, finished in a conventional monolayer. Increasing the conventional gradient of textures in homes of this kind allows us to modify the normal perception, changing the meaning of words like smooth, transparent, and reflective. 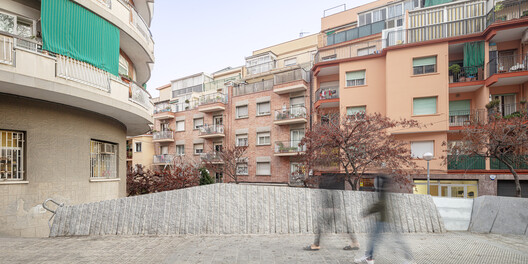