Although ultimately not chosen by the jury, who favored HESSELL & Herzog de Meuron's plan, this proposal by Eduardo Velasquez, Manuel Pineda and Santiago Medina for the rejuvenation of Flinders Street Station garnered the most votes from the public, winning the People’s Choice Award. The 'Courtyard Within a Station' concept seeks to activate the north bank of the river, as well as the western end of the site, and to improve the connection to Federation Square; the idea was to not only make the station a significant transportation node within Melbourne, but a new social and cultural center for the city. More images and architects' description after the break.

From the Architect. The Railway Experience will be greatly enhanced in the design with the inclusion of a new Western Concourse and an extensive deck that will cover the platforms. This deck will be scattered with voids allowing light, air and vegetation to extend downwards to the railway platforms. The existing Eastern Concourse and train platforms are to be extended to accommodate the predicted increase in passenger numbers. The increased facilities provided on the site will transform Flinders Street Station into an exciting destination rather than just a transitory transport hub as it is at present.

One of the key components of the design has been the imaginative re-use of Banana Alley. It is important that we are able to activate the Western Precinct of the site to draw people into the development from across Queens Bridge and all along Flinders Street, and to create a link to Esplanade Park and Batman Park from the station. Development of the western portion of the site is in the form of a combination of public and private interests. The development of a boutique hotel, commercial office space, an Interactive Sustainability Park (ISP@Y, Melbourne) with open plazas and green spaces, and the revitalisation of the Banana Alley Vaults, provides a balanced socially responsive solution to the Western Precinct.

The development of an urban park above the railway roof transforms the station into a highly accessible and usable public space that enhances both the everyday commuter and the visitor’s experience of Melbourne and contributes to its status as one of the world’s most liveable cities.

The entire design of the site allows for a multiplicity of uses that a modern city like Melbourne should expect from its public spaces. The new Western Precinct, the cultural and retail re-invigoration of the Administration Building, the hospitality of the Glass Box Atrium, the transformation of the railway roof into a vibrant Urban Park all serve to activate the Flinders Street Station, demonstrating that this design is more than an architectural solution. It is a vital piece of the puzzle to push Melbourne’s status beyond that of the world’s most liveable city to one of the world’s great cities.

The structural works consist of a new deck over the existing rail platforms to create the landscaped pedestrian Urban Park, the elevated Mixed-Use Building at the western end of the site, and the enclosed Glass Box atrium adjacent to the Administration Building. The proposed lateral-load resisting system for the deck incorporates ‘stability cores’ in reinforced concrete that continue through the deck structure to foundation level. The west building is supported for gravity and lateral loads by four reinforced concrete core walls, positioned outside the rail zones to remove the need for transfer structures over the rail alignment. The perimeter walls of the building incorporate three storey high steel trusses that support the column-free floors and transfer the loads to the concrete cores. The atrium structure consists of steel trussed portal frames supporting a glazed roof and wall.

The Flinders Street Station Redevelopment embraces sustainability, taking inspiration from the models we find in nature, as a means of providing a socially just, culturally rich and ecologically restorative urban community. This biomimetic approach is a crucial response in a world of limited resources and a changing climate. We have incorporated numerous environmental sustainable design features into the proposal such as water conservation and re-use, on-site energy production, smart technology for control of lighting and shading, and vacuum waste collection. Re-lifing strategies will be used in the heritage buildings to upgrade the envelopes and building systems to achieve significant reductions in energy consumption. For this project, we have opted to apply the Living Building Challenge, a leading international framework for sustainability. Flinders Street Station will be a vanguard of sustainability innovation that will define a new standard of excellence - transforming the site, the city and the region.

Our delivery process proposes the construction of over ten individual sub-projects, which will enable costs to be managed over time. In addition, this process enables revenue that is generated from completed components to be incorporated into the project funding of future stages. The project will be delivered progressively from west to east, beginning with the development of the Western Precinct and finishing with the Eastern Concourse and the reconfiguration of the tram stops on Flinders and Swanston Streets. It is estimated that from design finalisation to completion of the 10 stages it would take 7-8 years to complete the works. 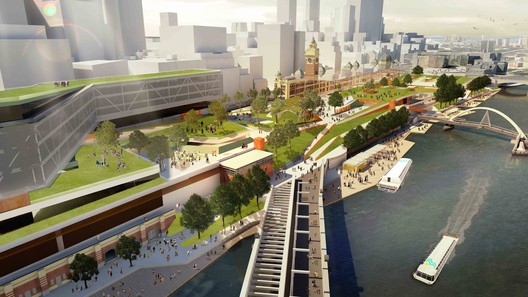