Recently announced as one of the shortlisted entries in the People's Choice Award competition organized by Major Projects Victoria, this design for the Flinders Street Station weaves together the history of the station with a potent new form to create a new public place for the future. Designed by Zaha Hadid Architects + BVN Architecture, their concept resolves the functional challenges while celebrating the travel experience. More images and architects' description after the break.

Our proposal creates a new place that embodies the urbanity of Melbourne, with its quirks, character and heritage. It is designed around a new public space that traverses the site, connecting to a reinvigorated Yarra River promenade.

-  A new Western Concourse
-  Access from the coathanger Bridge to the Concourse
-  New public spaces
-  The restoration and adaptive reuse of the Administration Building
-  The return of rail administration
-  New office space, a boutique hotel and destination retail
-  New event space with views of the Yarra
-  Reconstruction of the north bank
-  Realignment of William Street to improve traffic flow and create a forecourt for the Immigration Museum.

The transport function is improved by a greatly improved access into the station and by providing un-ticketed access through the station. The station address is improved by increasing permeability through the Administration Building. A new pedestrian tunnel runs beneath all platforms, connecting them to the Melbourne Metro Rail Tunnel to create an open, safe concourse, with clear visibility, sight lines and wayfinding.

Flinders Street Station is a Melbourne institution. The memory of its facade, of its clocks and activity lies deep within the psyche of the city. The scheme realizes the original idea from 1900 of a grand station by restoring the existing building and ensuring the southern facade of the Administration Building is visible. This concept also has a new galleria space on the concourse between the Administration Building and concourse. The Banana Alley Vaults are restored and become an active hotel lobby with bars, restaurants and cafes.

A piazza crosses the site, linking the city to Southbank across Sandridge Bridge. Improved connections are created via stairs, ramps, escalators and lifts.

A new amphitheatre and performance pontoon is located on the river in the middle of the site. Bikes and pedestrian pathways have been redefined along the river edge to create clear and safe separation. Circulation through the site is now public.

The tram stops on Swanston Street are relocated to improve connectivity to Federation Square. The combination of these two significant public spaces across the shared zone of Swanston Street establishes a new event/public space for the city. 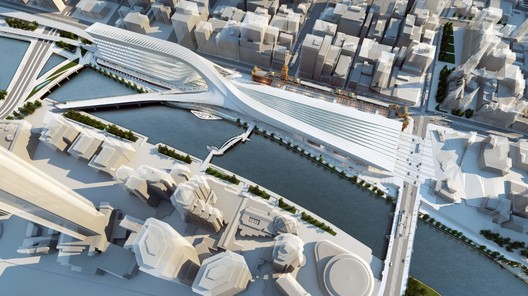