The Portland Building, by architect and product designer Michael Graves, is considered the first major built work of Postmodernist architecture. The design, which displays numerous symbolic elements on its monumental facades, stands in purposeful contrast to the functional Modernist architecture that was dominant at the time. As Graves explains of his architecture: it’s “a symbolic gesture, an attempt to re-establish a language of architecture and values that are not a part of modernist homogeneity.”

Read more about this controversial building after the break...

In 1979 the City of Portland sponsored a competition for the design of the Portland Service Building, located on a 40,000 square-foot block in downtown Portland. The project, aimed to hold the city’s municipal offices, was uniquely located adjacent to City Hall, the County Courthouse and the Chapman Square Park.

The young Michael Graves submitted his ambitious design, despite his lack of experience, partially due to an ally he had in the jury—his friend Philip Johnson. Graves’ colorful low-cost design impressed the jury, who discarded his competitors' costly glass and concrete designs, and awarded Graves the commission, knowing the design was bound to put Portland on the map—which it did.

The building attempts to create a continuum between past and present: it’s a symmetrical block with four off-white, stucco-covered rectangular facades featuring reinterpreted Classical elements, such as over-scaled keystones, pilasters and belvederes. The building is set on a two-story base, reminiscent of a Greek pedestal, which divides it into the Classical three-part partition of base-body-top. Furthermore, Graves added symbolism through color—green for the ground, blue for the sky, etc—in order to visually tie the building to its environment and location.

Reaction to the building was mixed among architects and Portlanders as well. Aesthetically, the highly-styled elements, such as the ribbons and medallions, were critiqued as lacking the dignity of an official government building. Others claimed the design was overloaded with symbolism and too preoccupied with references to the past.

More seriously, however, the building was criticized for “superficially” incorporating a traditional aesthetic without allowing said traditional elements to be functional. For example, although the design incorporates arcades, which conventionally provide a sheltered, interstitial space between the pedestrian and the city, the arcades that line the three facades of the Portland Building have only two entries set above street level, making them difficult to access. Similar difficulties of accessibility plague the fourth, park-facing facade, which has only two small doors that lead to a windowless restaurant and a back lobby. Users of the building also complain that the lobby is narrow and unpleasant, the office spaces dark and claustrophobic. To make things worse, cracks meant that the lobby and food court needed renovations in 1990, only 8 years after its opening.

Nevertheless, the Portland building is considered a major key-point in architecture history, bringing Postmodernism out of the academy and into the public realm. It paved the way for later, more mature Postmodernist buildings, such as the Walt Disney World Swan and Dolphin Resort (1990), Denver Central Library (1996), and the St. Coletta School (2006).

Despite its faults, The Portland building marked an undoubted departure from the monotony of Modernism. As Graves playfully explained: “I thought, ‘Why are they so upset?’ Modernism has given them a choice between vertical and horizontal, white, gray or black. Come on.” 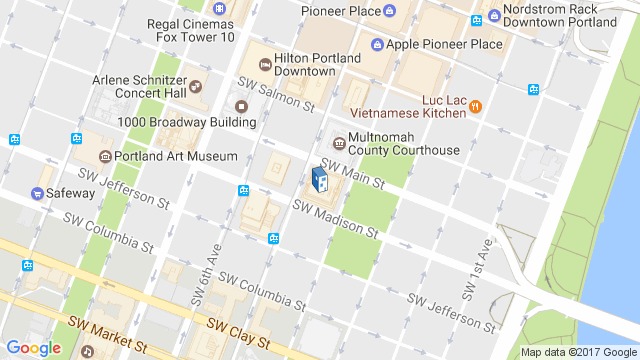 Location to be used only as a reference. It could indicate city/country but not exact address.
Share
Or
Copy
About this office
Michael Graves
Office
•••