Save
A Suspended Room / NeM Architectes 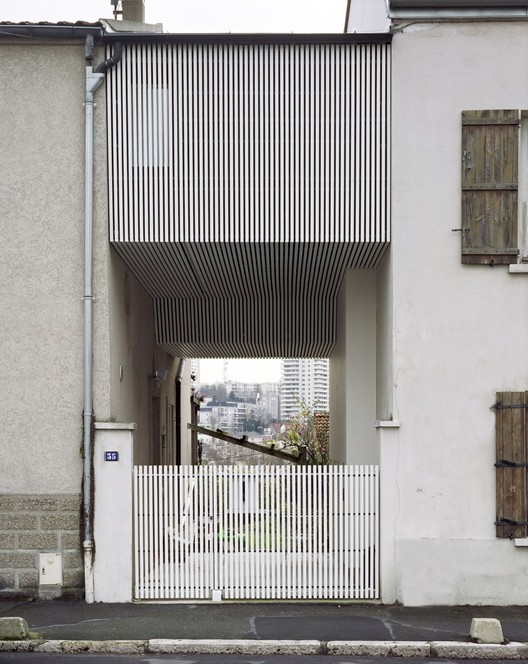 Text description provided by the architects. Located as it is in Gentilly in the vicinity of Paris, on rue Raymond Lefebvre where rows of houses go almost uninterrupted, this little detached house stands out. The interval separating it from the next building allows for a nice view on the Bièvre valley and its towers, providing a frontal framing for this fragmented cityscape, thus creating an unexpected confrontation in this quiet, almost rural suburban atmosphere.

The gap creates a break on this promontory overlooking the urban landscape and elicits the surprising impression of a perch above the street which otherwise looks like a continuous ribbon of house façades. The architecture in the neighbourhood is rather diverse, composed of buildings and houses that nevertheless are all relatively low. Likewise, the initial house was narrow with two stories and had an unoccupied attic. On the left, it rests against the adjoining building whereas the right gable end is actually a bearing-wall structure. The entrance and garden doors stand in the three-metre-wide space between the walls.

The idea of the suspended cabin originated in the need for a large extra space, the characteristics of the site, and the owner’s desire to keep a car park and to take advantage of an exterior sheltered area. As a separate entity, the extension is connected to the existing house using hidden pillars fixed to the gable. The wooden frame and the marine plywood cladding were built on site over three days.

The extension cladding suggests transparency and abstraction, only revealing the street-facing window when it is lit at night. A large window opens on the valley, offering the best possible framing for the vista.