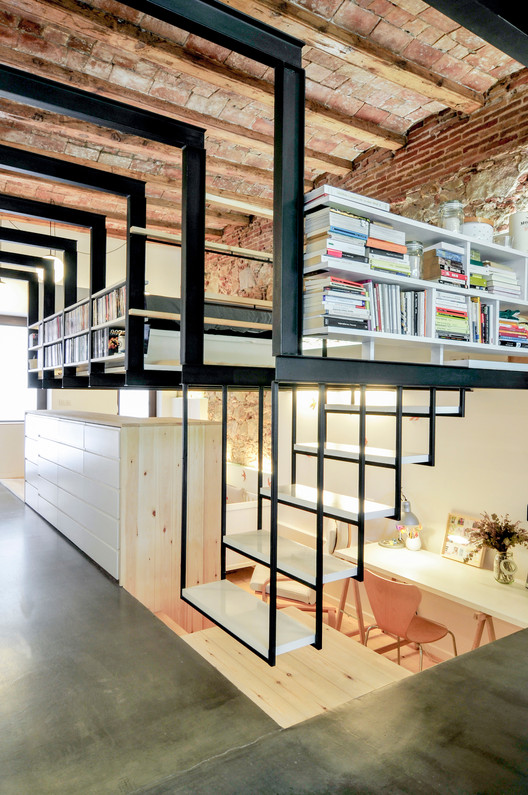 Text description provided by the architects. The conversion of an old dry-cleaning shop between party walls in the Gracia district court into a home-studio for a young family is a fantastic opportunity to rethink the use of an unused place and optimize the conditions.

It is proposed a system to enable the inhabitants to live in an single space arranged around the patio, where the bathroom is the only enclosed piece. All activities take place in a single room with visual contact with the patio. To achieve this, all the partitions that enclosed small rooms with no natural light or ventiliation were removed and the openings were extended to the exterior.

The original materials used in the party walls were recovered, as the brick ceiling joists and wooden beams. The pavement is solved with a continuous tinted concrete paving and the Flanders pinewood was introduced in a second phase of reform due to the growing of the family.

The lower excavation enables the incoporation of a loft made of metalic beams and a 3 cm. wood board, which works as an independent living area inside another bigger area, without being never enclosed room. This small loft is meant to be more like a suspended furniture than a room. A furniture-closet, used by both sides, is the only separation between different spaces and converts the hallway into a dressing corridor.

An old storage room at the back of the plot is converted into a satellite studio that operates independently from the main space. This fragmentation of the programme makes the patio an intermediate space that can be used as an outdoor room most part of the year.

A pergola made of metal beams and a cane network provides privacy and climate control. The progressive growth of plants and trees generate a natural environment within the dense urban area.