Designed as a sustainable master plan, the concept of water, waste, and energy management are integral to the concept of the Kanpur Riverfront Development project. Proposed by Studio Symbiosis, conservation of energy on the basis of transport management has been designed as an active design element in the master plan, which is a part of an overall scheme for rehabilitation of the Ganga river and the Ganga riverfront. More images and architects’ description after the break.

The project area is occupied by tanneries that are creating an unlivable condition for people of Kanpur due to pollution of ground water and the waste discharge in the river itself. The proposal looks at a rehabilitation scheme of moving the tanneries to a nearby location away from Ganga and provides housing for the existing slum population in the area.

The area being designed is the genesis of Kanpur and has a historical site where the city grew out of. A transit corridor coming from Lucknow enters Kanpur through the site marking its importance as the entrance to the city of Kanpur. the unique position of being next to the holy river Ganga but not being able to access it or enjoy this unique location was the main design driver.

The flow of the river has been captured as a fluid grid that moves along the Ganga creating a seamless space interacting with the river. Ganga simulations have been created to achieve an informed interactive edge along the river based on Program Attractors. Site is located along the riverfront on one side and on the other side is flanked by a dense city grid. This city grid has been seamlessly weaved in the master plan proposal and travels uninterrupted to the river edge maintaining a connection to the exiting arteries of the city. These two primary grids namely a free flowing horizontal grid and the vertical grid from the city interface in a sublime manner creating a unified design approach.

Green corridors lead inhabitants from the interior of the master plan to the Ganga edge thereby facilitating an experience based pedestrian movement to the river. The river edge itself has been studied for its existing use and the topographical conditions. The elements existing on the riverfront like Ghat (steps to river) and the archaeological site have been maintained and enhanced through the design.

New elements have been introduced to create a fluid movement along the river front with elements of recreation (cultural center, public plazas, shopping arcade, restaurants, hotel, cinema), cultural (archeological site and museum), administration along with town hall and business centers, to facilitate an interactive program and creating a lively river front. The program required a commercial, residential, and mixed use development. The transport corridors and the river edge have been taken as the magnets facilitating the distribution of the program. 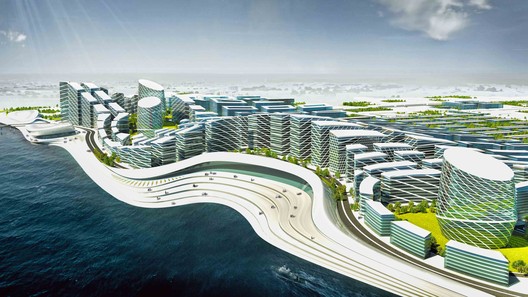