JAPA Architects shared with us their proposal, Dyv-net, Dynamic Vertical Networks, which deals with the development of modern, efficient and environmentally acceptable farming structures. Located in the Tai Po District, the second largest administrative district in Hong Kong, the architects foresee a paradigm shift to vertical agriculture structures which can be integrated into a territorial network along the country. More images and architects' description after the break.

Since 2000, China’s cities have expanded at an average rate of 10% annually. Although China’s agricultural output is the largest in the world, only about 15% of its total land area can be cultivated. China’s arable land, which represents 10% of the total arable land in the world, supports over 20% of the world’s population. Of this approximately 1.4 million square kilometers of arable land, only about 1.2% (116,580 square kilometers) permanently supports crops and 525,800 square kilometers are irrigated.The land is divided into approximately 200 million households, with an average land allocation of just 0.65 hectares (1.6 acres).

China’s limited space for farming has been a problem throughout its history, leading to chronic food shortage. While the production efficiency of farmland has grown over time, efforts to expand to the west and the north have held limited success, as such land is generally colder and drier than traditional farmlands to the east. Since the 1950s, farm space has also been pressured by the increasing land needs of industry and cities.

With an area of some 14,800 hectares in the northeast New Territories, it’s proximity to the high-rise developments of the Kowloon-Hong Kong area is a positive aspect to propose a low food mileage production infrastructure which can fed the city population (close to the urban centers).

Inspired by the traditional China’s rice farming agriculture amazing shifting terraces and by the earlier agricultural hardware which shows a tensile use of materials to produce structures which are resistant and at the same time can be light, our proposal emphasizes the use of shifting floor plates and light structural systems which incorporates recycled metallic material.The 187.50 meters structures will attract locals & international visitors and become new places for education and agricultural research. 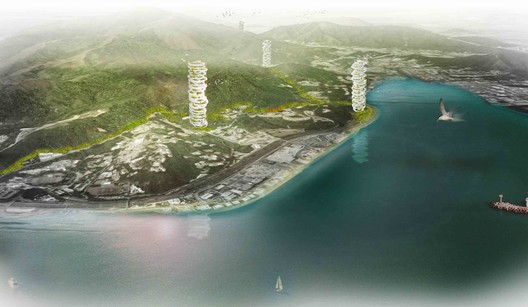