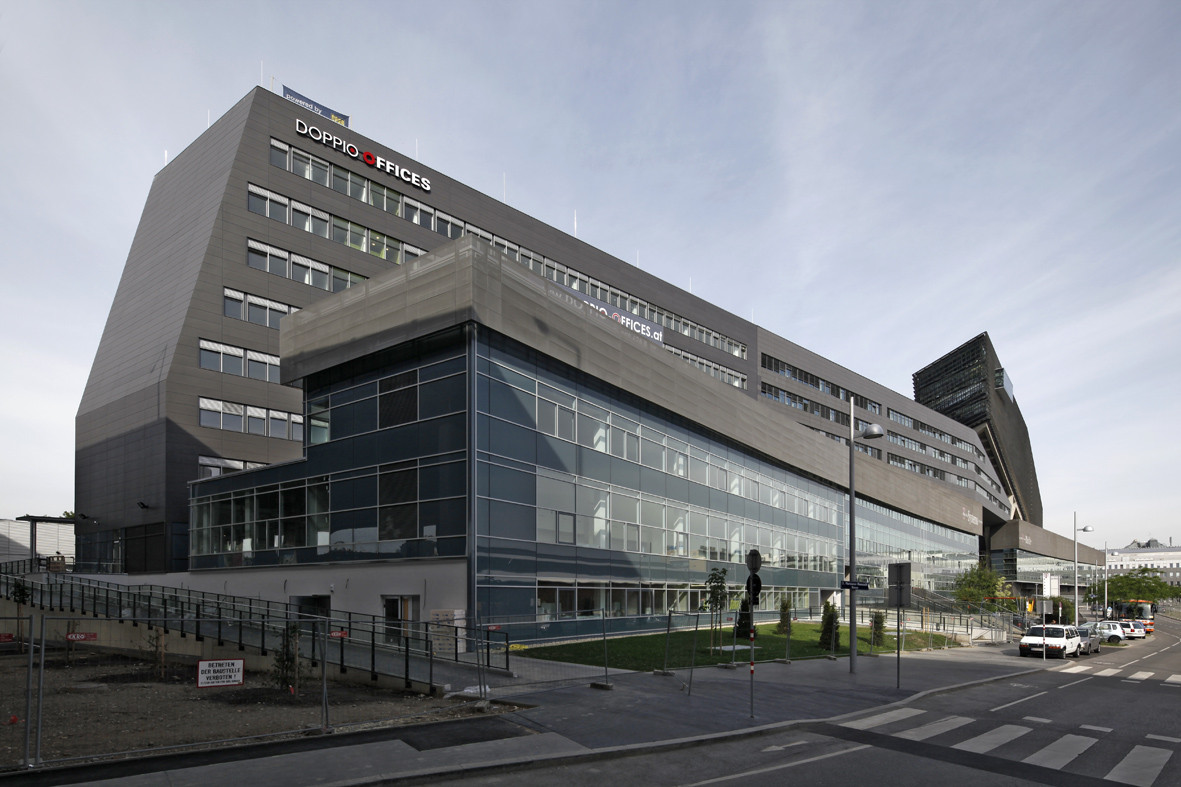 Text description provided by the architects. Keystone of urban development
With the opening of the Doppio Hotel and its adjoining office building at the end of June 2012, the urban development of the T-Center St. Marx area reaches its architectural conclusion after an eight-year construction period. In harmony with their big brother with regard to form and choice of materials, both new buildings on the property between Rennweg, the historic abattoirs and the south-eastern motorway, create their own space and in their extremely prominent urban location develop their very own – and necessary – language. Basically designed as “two discs”, both buildings project themselves into urban life very conspicuously and impress there especially with their spatial quality.

As a curve that faces away from the south-eastern motorway the dark two-part building positions itself next to the traffic structure as an architectural junction. It displays itself with raw, dark materials and celebrite raw corners and edges. In this way both hotel and office building together create a common forecourt, which at the same time defines the access roads, car park and green spaces as a threshold area in relation to the roadside environment. An important aspect here is also the encircling and connecting porch roof, which not only offers protection against the sun but at the same time outlines the extended pedestrian area.

Also other transitions and links, not merely the formal ones, add testimony to the important contribution the hotel and office building make to urban development and how it continues the multifunctional structure already defined by the T-Center. With its multiple use, developed spaces and connected routes, the entire building complex becomes an intrinsic part of the city’s traffic flow – the difficult urban location has an enriching effect and especially for this reason creates its own unique quality.

Project and urban development
The “Neu Marx” location as a whole is a showpiece project of successful and enduring urban planning for the development of the city of Vienna. And it continues to expand even further: From 2016 on, 15,000 people are to work here in this 370,000-square-metre city district. The start of the success story on this property at Rennweg, both with regard to location and time, is the T-Center St. Marx. The office building, designed by ArchitekturConsult and completed in 2004, is the flagship that creates the identity for the entire area and is the winner of numerous awards, such as the Otto-Wagner Urban Planning Award and the Austrian State Award for Architecture.

This private construction project, the largest of its kind in Austria, was made possible only due to the committed cooperation between investors, the City of Vienna and architectural planning. Involved from the very beginning in 1999, including in the intensive search for a location, ArchitekturConsult soon concentrated its planning on the area of the former Schlachthof St. Marx (St. Marx abattoirs) in the third municipal district of Vienna. The finished project responded appropriately to the exciting construction site, in the immediate vicinity of the cattle halls that are protected under conservation law, with its content of functional architectural sculpture, which creates variety and transparency.

The structure’s gross floor area of 134,000 square metres is used by T-Mobile Austria and T-Systems. Aside from office areas, also infrastructural facilities such as shops, restaurants, a childcare centre and a medical centre are available. The combination of these multiple functions, together with the open connection to the street and the bridge-like intermediate buildings, make the T-Center something unique in an otherwise dreary landscape of office buildings. The first, and largest, step in the transformation, restructuring and utilization of the St. Marx area was successfully taken with the construction of the T-Center. After several prospective customers, ideas for use and preparatory recommendations for development by Architektur- Consult, a hotel building and an office building could be made a reality jointly with the operator of Austria Trend Hotels, the Verkehrsbüro Group and Strauss & Partner Development.

Spatial and building structure
Facade material, window ribbons, roof pitches, height development and building axes of the Doppio Hotel and Offices correlate with the T-Center St. Marx, complement the sculpture of the original building structure and create a uniform character for the entire area. With the design of the T-Center St. Marx, ArchitekturConsult also worked out a general design and structural plan for the adjacent property. Aside from giving the entire development a monolithic sculptural character, also the stylistic transitions and the predefined multifunctional structure were important for ArchitekturConsult. In this way the hotel and office building adds further keynote elements and interconnections to the living mix.

Hotel and office building act independently. The two buildings are adjoined L-shaped, are of independent design – even the entryways and the supply sector are separated. The jump in level from Rennweg to Marianne Hainisch Gasse, parallel to the cattle halls, allows both the hotel and the office building to be supplied from there. Also the underground car park to the office building is located on this street. A ramp runs both between the T-Center and along Rinnböckgasse and joins the different levels by foot; this connects the entire building with the traffic flow by foot. The different uses of both buildings keep only the basement storeys on the same level; the upper storeys develop differently and meet again at the same junction on the seventh storey.

Hotel
The hotel is joined directly to the T-Center; however, it is located further from the street to guarantee the “top point” of the neighbouring building an unobstructed view. Toward the street the disc is offset from the fourth storey on, with a further offset starting from the seventh storey. Here a flat rising roof parapet is formed, which meets the office building at its highest point. The entire roof is additionally covered with a lamellar lightweight steel construction – this adapts form and material to the entire complex and creates the monolithic character.

The 155 rooms of the four-star hotel run in an easterly and westerly direction from a central corridor. The main entrance is accessed via the forecourt and Rinnböckgasse. From there the entrance area is accessed directly. The spacious lobby is dominated by a long counter, which serves both as reception and bar. The restaurant and the conference rooms are connected directly. A green area in front of the restaurant provides space and distance between it and the roadside environment. The access and the emergency staircase are also located on the sides and serve as a buffer zone.

Office building
The office building consists of two wings and a formally connecting one-storey conference hall located in between. One wing of the building, the 7-storey disc, closes the forecourt, and the other wing, considerably lower with three storeys, runs in a curve along Marianne Hainisch Gasse. Also the large disc of the office building is offset slightly toward the top and in this way exhibits window ribbons of different lengths. Each storey in each building is designed for individual use and equipped with large and small kitchens and WC facilities. All imaginable variations of small-sized offices with up to 1,200 square meters of floor area are possible. What makes this building special is that aside from the numerous spatial qualities, its views and potential for variety, it has quiet and ecological building unit cooling, which replaces an expensive air-conditioning system and saves on high energy costs.

Choice of materials
The T-Center is composed of different areas and materials: The basement area, the public zone on the Rennweg level, the 13-storey “wing” (with aluminium-glass transparency) and the “fingers” (with facade panels). The Doppio Hotel and Offices on the Rennweg and forecourt façade take up the black large-format fibre-cement facade. Both buildings have continuous ribbon windows. All elements are generated from a range of materials and forms that was defined by the architects already for the T-Center project and the structural plan. These define the conglomerate of material for the monolith and a facade which is never merely skin, or just facade.

The changing and highly varied combination in its every detail evokes a slight irritation in spite of its unison. Perhaps it is the location which turns something as well-known as Eternit into a different originality. The buildings with their dark facade panels, raw corners, edges and bent structures appear deliberately raw and still in a state just prior to their final setting; the last crackling sound can almost be heard in the city. 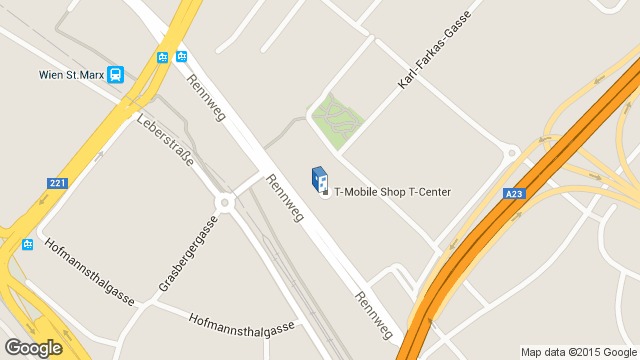 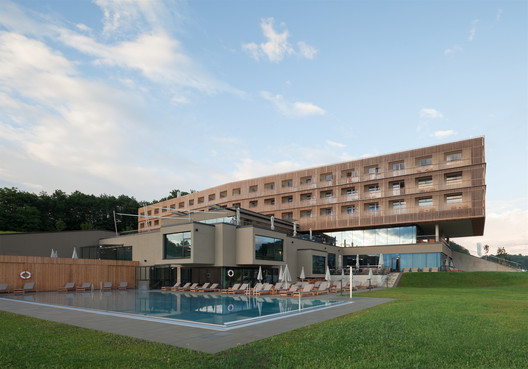