With the potential to become one of the most attractive cities in the greater Moscow region, the proposal by de Architekten Cie. for Odintsovo integrates dispersed urban fragments and the landscape into a harmonious whole. By injecting the iconographic urban fabric, cultivating existing greenery, enabling forest to penetrate to the center, forming green rooms, and greening (planting trees) on existing boulevards, the scale of the city is formatted on a human scale. More images and architects' description after the break.

By its location, rail and roads connections, commercial-, cultural- and sport facilities, it´s green aspirations, university and science campus, in its close proximity of Skolkovo center, Odintsovo has great potential. A new highway on the north side of Odintsovo and a new railway station for a high speed rail line, which eventually will link an innovation center ´Skolkovo´ with the proposed international financial center in Rublevo-Archangelskoe, will additionally strengthened Odintsovo as a desirable location for living, working and education. The surroundings of Odintsovo are characterized by a rich and beautiful network of water bodies and natural green penetrating the city. Both green and water are used and enjoyed by the people of Odintsovo.

Discussing the regeneration of Odintsovo conjures up an association that at first sight does not seem terribly obvious: the painting Victory Boogie Woogie The rigor of Mondrian´s sharply defined fields of color in his earlier work could be compared with the fragmented early development of Odintsovo, in the same way his classically minimalist work found a later pendant in the plan of modern urban planning. In its apotheosis, Victory Boogie Woogie, both tendencies are reconciled in a rich and lively painting, just as the two outlooks in the history of urban planning are reconciled as overlapping layers in the regeneration of Odintsovo. The Odintsovo Boogie Woogie concept could be exemplary for the way the centers of soviet cities can be regenerated, resulting in a higher level of comfort, security and technical sophistication.

Programmatic densification and establishing of new public program together with series of different public spaces results in a contemporary garden city. New landmarks as railway station, city hall, health center with swimming pool and a eco dome, are well connected by visual lines as well as pedestrian paths enhancing idea of a city in a park. A new rearranged compact Odintsovo, with reduced car mobility, lower ecological footprint would also allow for high quality of social life and security, with series of places to meet, sport, children to play, to shop, learn and work.

Several instruments play a key role in the regeneration of Odintsovo:

The block typology establishes a hierarchy of outdoor spaces which interact and work together: Outside the block: Public Space. Combining public space with infrastructure, circulation, commercial functions and housing, provides a self-monitoring environment. This increases security, encourages social interaction and fosters a sense of community at neighborhood level.

Communal Space is focused within the courtyards of the blocks and shared among residents. This space is not freely accessible for the public. The communal space is self-monitored by the residents and fosters a smaller community at block level. Private Space ' Every apartment has a private outside space. Furthermore the ground bound units within each block  have a small outdoor space or front yard.

In today's world of development, sustainability is becoming standard. But it is only standard in terms of speaking about it and often not in terms of actual understanding of how to design a financially feasible project and to deliver a truly sustainable final product.  In the world of sustainable development the most significant move one makes is the initial strategy.

Planning and designing a compact, dense, mixed place is the most ecologically sensitive development of all. And that is our primary goal - to create a rich, divers, lively project, 'sustainable' in the everyday sense of long-lasting: from keeping the impact on the environment to a minimum to establishing the best conditions for sustainable and equitable social relations; from the use of sustainable materials to buildings and spaces that are so flexible they can adapt to various forms of use and function, with the only certainty being that these will definitely change over the course of time.

The buildings structural grid allows multiple unit configurations to exist. Therefore the block can be formed entirely of small studio units, larger apartments or a mixture of sizes, offering immense flexibility in the plan. 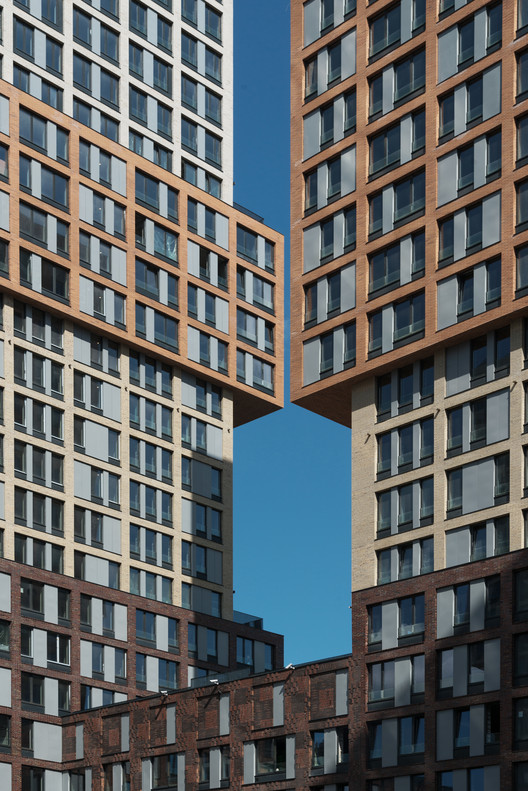