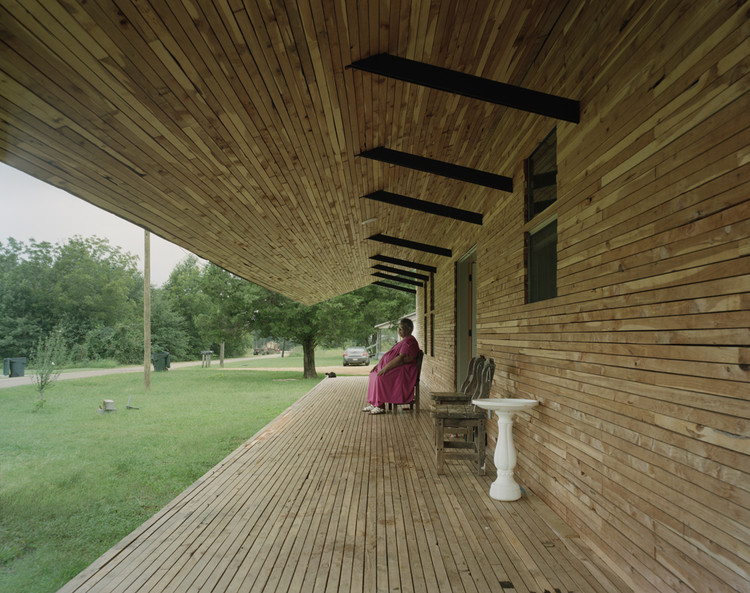 Text description provided by the architects. Rose Lee’s House is the result of two semester’s work of the 2nd Year Studio at Auburn University Rural Studio, in West Alabama.

Rural Studio is an off-campus design/build program, part of the five year Bachelors of Architecture at Auburn University. Located in Newbern, a small town one hundred miles northwest Montgomery, Rural Studio was established in 1993 by Samuel Mockbee, a well-known Southern artist and architect from Mississipi, and fellow Auburn professor D.K. Ruth. Since 2002, Rural Studio has been directed by Andrew Freear, a Yorkshireman, trained as an architect in the United Kingdom.

Each year at Rural Studio, a group of thirty 2nd year students design and build one group project. At the same time, the 5th  year students run large community projects. Also, a small group of Outreach students, from all over the world, investigate affordable housing prototypes, each year designing and building, a new evolution of the ‘20K House’: a home for everyone.

In the last twenty years, Rural Studio has designed and built over one hundred projects within a twenty-five miles radius of Newbern.

The purpose of the 2008-2009 Rural Studio Second Year Studio was to investigate contemporary forms of rural dwelling. In designing a home for Rose Lee Turner, the team focused on the idea of the Expandable House. This house expands and grows by need over time; it is based on the traditional local farmhouse strategy and its design is driven by the client’s priorities, necessities and lifestyle. The Expandable House responds to the transient nature and demographic of the contemporary family. The goal is to propose a strategy capable of providing a flexible home, open to different variations and future expansions.

Rose Lee’s House was Rural Studio’s first attempt to design and build  an Expandable House. For this first experiment, the courtyard typology was chosen, with all its ‘U’ and ‘L’ shape variations, to connect and guide the future alterations of the Expandable House. The courtyard brings natural light, weather and landscape into the center of the dwelling and, during the hot Alabama spring and summer months, becomes an outdoor living room.

Rose Lee’s House was designed and built for a family in Footwash, a small black community situated ten miles south of Newbern.  The Footwash community is developed around two dead-end roads and a small grocery store and surrounded by dense woodlands. The 1/4 square mile community is characterized by a large open area, known as “downtown”, which is dedicated to the annual Footwash Black Music Festival and a “suburb” of small wooden houses with front porches that face the street.

Rose Lee’s property is a long, thin plot in the middle of the “suburb”, oriented north-south. The survey and understanding of the large-scale context of the site gave the Studio a very important basis to move forward.

Rose Lee’s House is an ‘L’ shape courtyard house, with a long horizontal porch facing the street and a square patio facing to the back yard.

The porch is dedicated to Rose’s social life, in the spirit of the traditional Southern front porch. The courtyard, enclosed by a semi transparent cedar wall, provides the protection of the family’s privacy. The porch has a 180° view towards Footwash’s ‘Main Street’, with a bold overhanging roof, delicately held by light metal supports. A variety of openings in the courtyard’s wall provide special visual contact with the neighbors: Rose’s mother, the nephews and the dog sleeping in the back yard. The two very different outdoor spaces help the house environmentally. The porch, facing south, shades the building in summer and the courtyard, facing north, gives a mild outside living room in winter. The “day” part of the house sits between the front porch and the courtyard, both of which are accessed via large sliding doors.

The 1,200 square foot dwelling has been designed with a core volume called the ‘Machine’ with a perpendicular ‘Expansion Wing’ on the west side of the site. The ‘Machine’ covers the main family needs: the master bedroom, a large living/dining room, kitchen and bathroom. The ‘Expansion Wing’ provides two more bedrooms for Rose’s sons. In the future, the house could accommodate a young couple with one child, to take care of Rose Lee in her later years.

The home uses passive strategies to light, heat and cool the house naturally while also reducing utility costs. Both the kitchen and bathroom have natural light and ventilation and the living room and bedroom openings provide cross-ventilation. A clerestory on the front elevation allows sunlight to heat the house in winter. A salvaged fireplace completes the heat supply of the house providing an effective source of heat with readily-available fuel.

The design and build process

Rose’s house was designed and fully built by two groups of seventeen students, between nineteen and twenty-three year in age. The students built everything from foundations to finishes, including electrical and plumbing work. The students were encouraged to learn by observing, designing and building along the two semesters, working as one large team.

The first group, who spent the fall at Rural Studio, designed and built the ‘Machine.’ The second group, who joined the project in the spring, finished the house with the ‘Expansion Wing’ and the courtyard. The fist group design work focused on the typology, site location and form of the building; while the second group designed details, finishes and materials choices. Both groups shared the same strategy of building a new home for Rose Lee in phases, allowing the family to keep their existing home until the new one became ready.

Rose Lee’s House is a standard wooden platform frame structure with a ‘pop up’ roof held up by four trusses, of 2x8 nominal dimension heart pine salvaged from a local barn. The same recycled wood was used to wrap the walls in the living room and the expansion hallway in order to give a hierarchy and a warmer texture to the communal interior spaces. The freestanding courtyard wall and rain screen cladding have been built with cedar wood, which has traditionally used on Southern buildings because of its water and decay resistance.

Every detail of the house was drawn full-scale and mocked-up to make sure that each choice guaranteed low maintenance and longevity as well as a coherent design for the house as a whole.