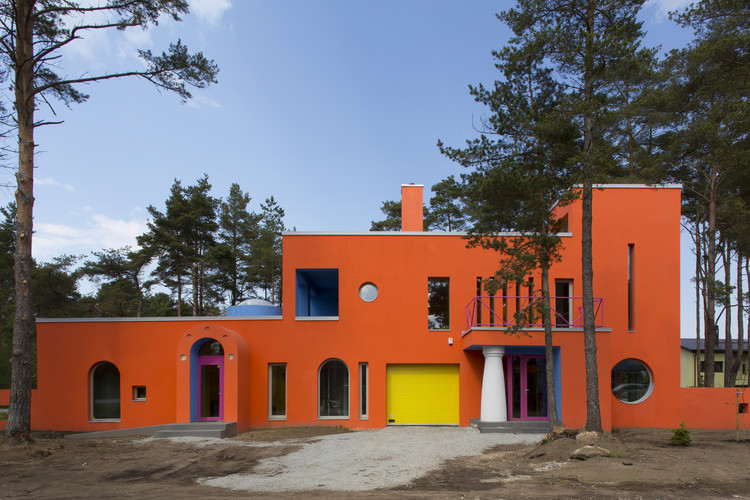 Text description provided by the architects. I met the lady of the Elephant House years ago in the gym of Viimsi SPA Hotel. Doing rowing exercises with ergometer, Kristi and I got talking and discovered we had many interests in common. The nice young lady worked as a doctor, but was also fascinated with everything alternative. Then Kristi vanished for several years and turned up again fairly recently. She phoned and said we were going to build a house. I met her husband Tarmo as well, a civil servant, whose interest in art and personal talent quickly made us firm friends.

The solution of the Elephant House largely rests on the initiative of the young clients with their extravagant wishes, my growing keenness on heavy, stronghold-like architecture and a need to produce colourful solutions. I remember that the clients sent me a picture of a weird house from a computer game, with mammoths, Gothic windows and technological screens. I was certain I was pretty crazy, but was I crazy enough to satisfy the clients? In the course of work, the mammoths were replaced with a sculpture of an elephant calf, the Gothic windows with elongated slits and a few curved windows. Travelling towards Maardu from Tallinn along the Muuga road, we come to the plot about a hundred metres from the border of Maardu. I drew a strong façade screen crosswise with the big road, which ends with a wall where a light blue little elephant welcomes the arrivals into town. The world behind the screen is divided into two. The lower part has the medical centre and the higher part is the residence for the couple and their two children.

Colours play an essential role in the solution. The main exterior colour is orange, supplemented in details by lemon yellow, light blue and pink. The interior is dominated by white, beige, yellow, orange, red, bluish-green and pink. The harmony of colours perfectly fits August Künnapu’s large-format paintings in the residence entrance hall and with smaller pictures in the doctor’s waiting room. In the centre of the waiting room is a sculpture designed by the current author, which I see as a time machine or a healing stupa. The walls around the stupa display three round pictures of cats, one picture of a doctor and a painting showing Brezhnev together with Tajik peasants (all by August).

The first floor of the residential house accommodates a hall, garage, gym and kitchen-dining room. The second floor has a living room, 3 bedrooms, an office and a stairwell with light coming from above, also presenting a few of my small sculptures and 2 pictures of the first sketches and watercolours of the house. The large bathroom has a round window opening into the stairwell and to the painting where a girl is taking off a stocking. These pictures have the air of the 1920s about them. I notice that the architecture of the house as a whole somewhat resembles a sense of Art Deco of the 1920s and 1930s. The tops of the New York skyscrapers, after all, constitute energy towers of a kind.

We can say that the entire elephant House is in a sense a time machine, which leads us into a parallel magic world. Or it could be a ship where the passengers take a long journey across the ocean called Life.