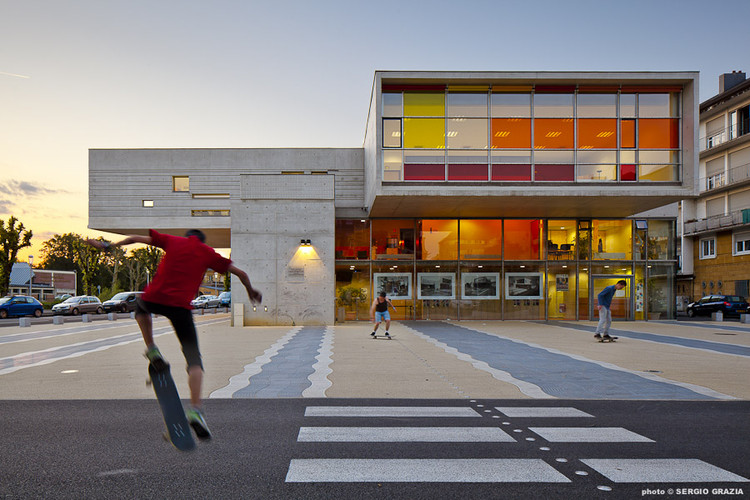 Text description provided by the architects. The cultural center occupies a privileged site in the center of the northern French town of Sedan along the banks of the Meuse River. Attched to the central space of the theater, four suspended parallelepipedic volumes frame the landscape.

All in glass, some announcing their purpose via vertical letters in concrete, it is easy to see the activities that are going on inside : dance to the north, movement to the south and, on the balcony overlooking the Meuse, the studios of the youth and culture center, the Maison des Jeunes et de la Culture. The south façade facing the street, Rue de Ternaux, is a simple plane of concrete. Composed of two horizontal modules, it is framed by the profites of the wings housing the dance and movement studios. The cultural center remains a public building open on its four sides to the plaza.

The center’s raised volumes open up the urban space, allowing the gaze to pass through, offering sheltered areas between the interior and exterior opening to the Place Calonne, along the Meuse, facing the island. On the ground floor, even with the level of the plaza which integrates older neighboring buildings, the lobby, the management offices, and the multipurpose theater constitue a dynamic place of culture directly open to the city.

The lobby is transparent facing the river. A friendly place, it invites visitors to come inside. The multipurpose room is equipped with a folding stage and retractable spectator stands, making it possible to transform it into an open space with a surface area of 350 square meters. At the back, the storage area for stage sets communicates with the street. Above, the dance studio is designed according to the same module as the stage so as to enable rehearsals of choregraphed shows in an identical space.

The kitchen below is arranged like a café, opening toward the bridge over the Meuse to the north. All in all, this appealing form, expressed in powerful architecture that nevertheless retains its human dimension and remains respectful of the urban environment, contributes, thanks to its flexibility, accessibility and transparence, to the community-minded image of this place of culture. 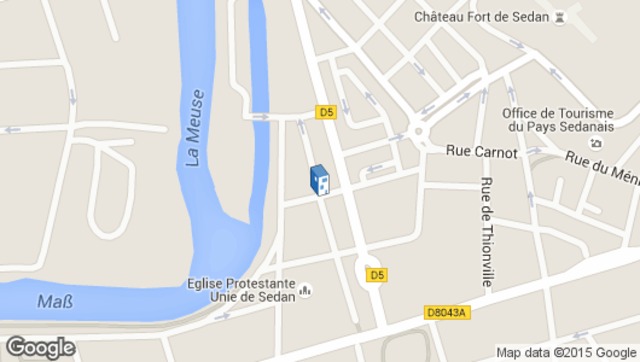