Aiming to connect Haifa with the sea, the proposal for the New Haifa Waterfront Plan by Amir Mann-Ami Shinar Architects and Planners focuses on the making of large open public space along the water. Some new "warehouse-like" linear structures will be built, only two-story high, and all buildings, old and new, will maintain industrial character. Also, with the old cranes, the overhead grain-conveyers and other working port facilities will keep the unique port atmosphere. More images and architects’ description after the break.

Haifa is a seaside city, but with no access to the sea. Since the port was built, in 1933, then the first modern harbor in Palestine, it has totally blocked the city itself from the waterfront. Today, its narrow wharves are outdated, most of the port activities have gradually been relocated to the new Eastern Port, where new wharves are planned, destined for the future generation of container vessels, too large for the old, Western Port. This is the time to transform this old port to a new vivid, civic place that will revitalize the city of Haifa.

Haifa needs the approach to the waterfront more than ever. But, here we find a dense arena of conflicting interests.Who will have the priority - the City? the Port? the Train? Moreover, in this small area many governmental bodies are involved, each caring for their own interests only, ignoring each other and definitely the City. Among them the powerful union of port workers is most dominant with consistent opposition to any change,(unless it is compensated with a new wharf).

The dilemmas and challenges inherent in this plan are grave indeed: How to convert a still operating port to an urban space? What should be done with the Granary, yet with no alternative? What activities should be developed? Residential also? Should we build new structures? If yes – where? How high? For what uses? How do we actually connect the city with the waterfront? How do we overcome the train barrier?

We studied in detail the specifics of the site, its constraints and possibilities as well as the positions of all involved players. We studied similar places elsewhere, and through an intensive two year planning process, with all involved bodies, we developed the plan based on the following ideas.

1.  A wide pedestrian promenade along the water, a generous public space.
2.  Continuous activities along the promenade: cafes, restaurants, small hotels, open-air food markets, cultural and more. No enclosed malls, no residential –in short, this is not a real-estate driven project, nor a "tourist trap".
3.  Reuse of all remaining port warehouses for a variety of activities.
4.  Co-existing with some port activities; maintaining its authentic industrial spirit.
5.  Low built profile, preserving the long vistas from the city to the sea.

80% of all land area is public open space; all built coverage is no more than 20%, (and even so, it still holds some 100,000 sqm of mixed uses, mostly on ground level). The west area: Here most visitorswill leave their cars in the new large parking area and walk towards the promenade via three new eastward pedestrian "streets" enjoying the long beautiful views of the main body of water, with its ever changing scene of ships come and go. Here also we will renew the only residential element within the waterfront – the remains of a small Arab neighborhood, today trapped between the port-fence and the train track. The adjacent Military Port, once evacuated, will develop similarly, its wharves will be converted to a yacht marina. The pedestrian walkways will continue smoothly from the first stage on, creating a network of small streets, promenades and plazas.

The central area and the train barrier: the bridge buildings. Before the port had been built, the main access to the sea was here, at the bottom of today's Ben-Gurion Boulevard, stepping down the magnificent Bahai Gardens. At this point the German settlers (who actually established the future Haifa) built a pier to welcome Kaiser Wilhelm's visit in 1898. But, perhaps here more than any other point along the city-port interface, the train track barrier is apparent and painful.

The track should be depressed, but at unknown stage. Therefore, as an interim solution we created two bridge buildings, (containing some shopping, cafes etc., at both levels) hovering over the track, with one foot on the city side and another on the sea side. These buildings also form the urban gateway to the sea - Ben Gurion Plaza. Once the track is depressed, these gateway buildings will operate without change.

The east area: Here we will reuse the three abandoned warehouses, notably Hanger 15, an impressive 10,000 sqm concrete "cathedral" that can house so many activities, commercial and cultural alike. No additional buildings are needed. The new Haifa waterfront will transform this conflict zone to a place of new opportunities.

The plan was approved by the Israel National Planning Council this year (2013), was presented to the public and all parties of interest that enthusiastically accepted it: all but one - the Port Company itself. How to convince the Port Company to implement the plan remains our next challenge. 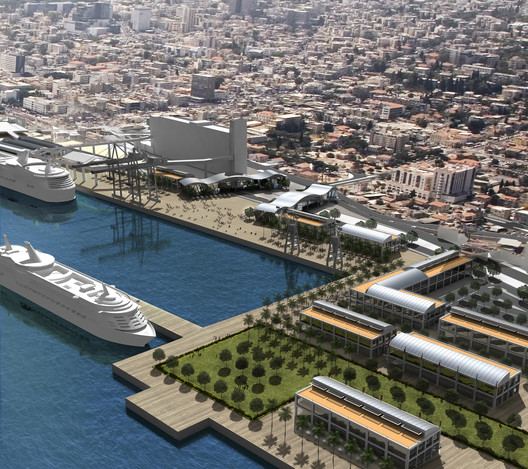