Henn recently won the architectural competition for the gas and steam power plant in Wedel, Germany. The new power station is positioned to the north of the river bank to allow the uninterrupted riverside promenade passage open to the public. While the majority of the existing station has been demolished, individually striking industrial relics and architecturally significant elements, such as the listed machine hall, are retained and put to cultural use. More images and architects' description after the break.

In the outskirts of Hamburg, on the banks of the Elbe sits Wedel, where a new, energy-efficient gas and steam turbine power plant is planned for the former coal-fired power station site. An important component of the design is the envelope of the new power station building, which creates a vibrant setting for the processes taking place within. Water as the energy carrier, the changing state of various units, lightness and variability suggest the model of a cloud for the facade design.

The sides of the building are divided into transparent and opaque areas constructed in fairfaced concrete, semi-transparent structural glass, glass blocks, reinforced concrete and glass profiles. The variously reflective surfaces of the building change in appearance with the weather and position of the sun, symbolically describing the function of the power station. Exposed building components, such as chimneys, tanks and the air capacitor, are constructed in reflective steel plates and accentuate the industrial character of the complex.

The side of the power station facing the Elbe is made particularly visible to the public. The translucent glazed façade makes the internal processes perceptible from the outside. At night, the bright illumination reflects the activity level inside the operating power station. When a great deal renewable excess energy has been stored, the power station is at its maximum brightness. When the energy storage capacitor is not in use, the illumination is correspondingly soft.

The open space design, with its broad green belt surrounding the power station site, seeks to integrate the public footpaths and natural areas into the project. South of the power station and along the Elbe, a green platform in front of the power station widens the popular riverside walking route and creates a landmark meeting place with an extensive view of the lower Elbe. 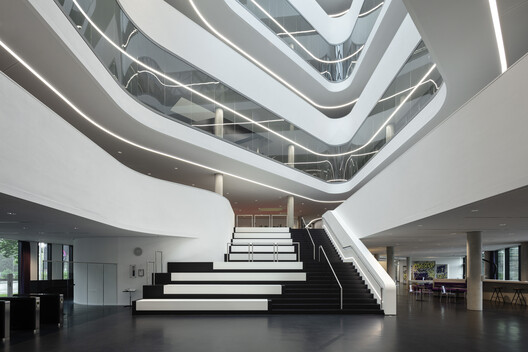