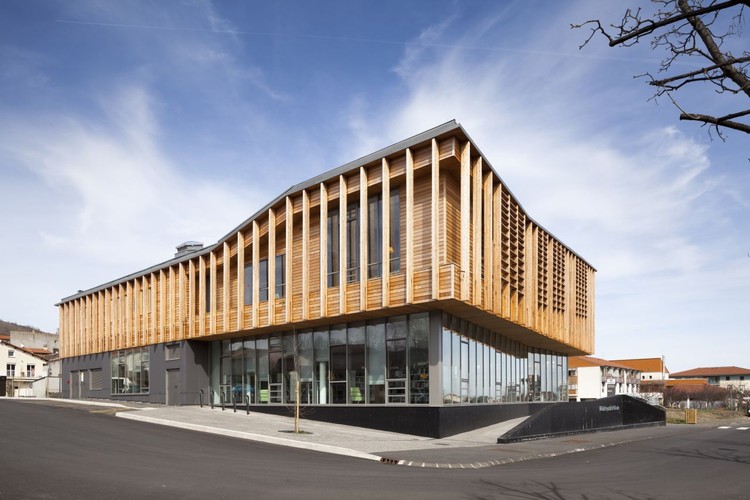 Text description provided by the architects. As a regional media library situated in the village of Blanzat, in the hilly volcanic Auvergne region of central France, the project needed to address two distinct contexts and scales simultaneously. This produced a kind of “double reading” of its built form and materiality at both the territorial and the local scale. Placed at the edge of a large grass prairie flanking the edge of the upper village, the large wood, zinc, and concrete panel-clad mass of the library brings a new and larger institutional scale to the site, while its complex array of roof pitches evokes the more immediate and domestic context of its tile-roofed residential surroundings. We began to think of its iconography as that of an oversized house with garden.

The traditional organizational hierarchy and typology of the library is completely re-thought in the project. The conventional singular and centralized lending desk has been fragmented into a smaller grouping of information and lending areas, corresponding to various thematic “territories” (Fiction, Young Public, Press, Documentation, Multimedia…) dispersed throughout the lower and upper floors and oriented around a central skylit atrium. A level of domesticity is brought to the institution, where the user is free to meander, and to choose an orientation, a quality of light, and scale of space that suits both disposition and activity.

The rise of digital technology and multimedia has changed the relation between user and document, and consequently the nature and quality of light in the contemporary library. One must take into account, on one hand, that conventional printed text and image are literally “brought to the light”, while on the other hand taking into account the increasingly larger proportion of screen-based media, which generates its own light source (LED, plasma…) and requires low ambient lighting levels. The internal and external organization of the Media Library reflect this duality: light sources and levels are modulated via the external wood building skin (untreated Larch) and interior lighting in order to create a diverse range of reading conditions and atmospheres.

The building’s hybrid structure of concrete (lower level) and wood framing (upper level) was the result of seismic factors, and also serves to detach the upper level of administrative areas and lofty public consultation spaces from the more grounded and smaller-scale public spaces below. External openings serve both to filter and to frame the surrounding landscape.

A combination of sustainability parameters were introduced in the early conceptual phases of the project. The compactness of the built volume, coupled with a high thermal inertia and reinforced insulation in external walls and roof, reduces transmission heat losses. The configuration of the façade adapts to the building’s orientation: the upper floor entirely in wood construction cantilevers beyond the heavy, set-back concrete and glass ground floor on the east, south, and west sides, creating a natural protection from direct sun in the warmer months; the closely-spaced vertical laminated wood beams on the east and west façades protect the consultation spaces from lateral glare, while acting as a support for inclined horizontal wood “brises-soleils” on the south façade. The building is ventilated naturally by means of peripheral windows as well as a secondary mechanical ventilation system used in summer months for nocturnal fresh air renewal and ventilation. 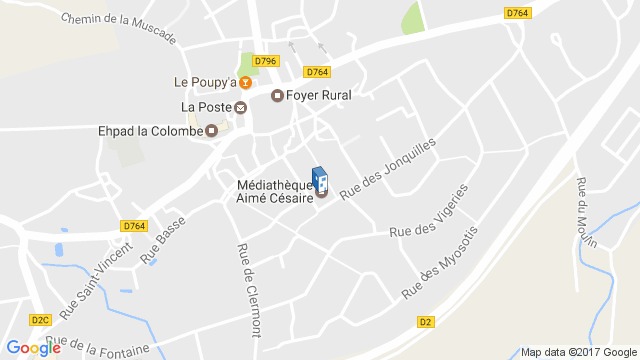