Save
Circuit of The Americas / Miró Rivera Architects 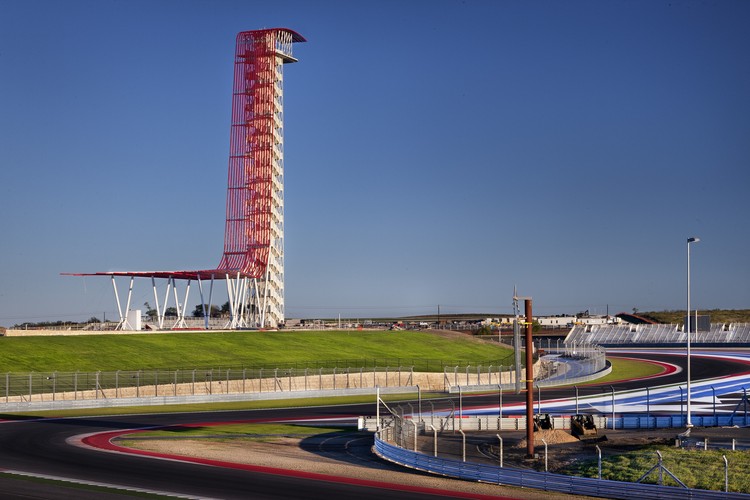 Text description provided by the architects. Austin-based Miró Rivera Architects are the designers of the signature buildings at the Circuit of The Americas, the first purpose-built Formula 1 Grand Prix™ facility in the United States. The architectural features of this new world-class motorsports and entertainment venue include a 251-foot tall bridges over the track. As the designers of the main public spaces and buildings around the 3.4-mile track, Miró Rivera Architects are responsible for the aesthetic and much of the experiential qualities of the site.

The main architectural language of the facility evokes the precision, dynamism and performance-driven design of racecars. It is also visually stimulating, incorporating banners, billboards, and bold graphics. The architects bring their innovative approach to the structural systems: rather than being concealed behind a building’s façade they are articulated and become significant parts of the design. An architectural theme reoccurring throughout the site is the use of red steel tubes. The tubes cascade down the side of the Observation Tower to form a canopy for the Amphitheater stage and also frame the Main Grandstand. Evocative of sports cars and movement, this element ties the structures together creating a consistent visual experience.

The Observation Tower serves as the centerpiece of the complex, which rises over the racetrack offering sweeping views of the entire venue, downtown Austin, and the nearby Hill Country. The tower, a dramatic backdrop to the Amphitheater, provides a visual end to the Grand Plaza and also serves as a reference point for spectators throughout the site. Its observation platform at the top can hold up to 75 people and features glass railings and a glass floor.

The amphitheater, carved into the center of the Circuit of America’s Grand Plaza, will be used for large-scale music and entertainment events. Spectators will enter the amphitheater at the back of the lawn and descend toward the stage passing two tiers of fixed seating with a capacity of 5,233. The front center section with fixed seating and premium views of the stage are occupied by nine rows of box seats. The floor seating area gives the venue the flexibility to host a variety of events with options for an additional 1,528 temporary seats, banquet tables, or standing room areas. The stage itself is located at the base of the observation tower whose red steel tubes start at the top of the 251’ tall tower, spill down and spread out to form a canopy over the stage. The canopy protects performers from the elements and acts as the stage’s hanging grid to support stage lighting and speaker arrays.

The Observation Tower and Austin360 Amphitheater serve as a memorable backdrop for the Circuit’s Grand Plaza. The 27-acre plaza, bordered by the track on three sides, lies in the heart of the Circuit and defines the public experience of the complex for most users entering the venue. As visitors enter the plaza they are greeted by a large hardscaped plaza and lawn containing a reflecting pool of nearly 16,000 square feet.. With the reflecting pool at one end and the tower and amphitheater at the other, this strong axial relationship across the plaza creates a dramatic moment of arrival. The plaza contains varying landscape zones that enclose the space and define unique areas of activity. The plaza’s location inside the arc of the track captures the energy of racing: its speed, noise, and excitement. The race rushes around visitors on all sides, heightening the experience of the track.

A promenade along the north side of the Grand Plaza hosts concessions, retail areas, restroom facilities, and the Turn 15 Grandstands. Along the promenade is a monumental lawn, sized to accommodate a variety of events throughout the year, including soccer games and music festivals. Pedestrian bridges, located at Turns 3 and 16, provide access for visitors to other areas of the circuit complex. The buildings of the promenade create a trellis-covered boulevard, which serves as a significant gathering point for visitors enjoying the many activities of the Grand Plaza. At the end of this promenade visitors will find a pedestrian bridge at Turn 16, which connects visitors to the track infield and to another bridge at Turn 3, which allows visitors to completely cross the track.

The Main Grandstand is located in front of the start and finish lines with views of Turn 1 and provides seating to over 9,000 spectators on three levels. The ground level houses offices and concessions, while the second floor contains amenities, including a 6,500 square-foot lounge and event space. The third floor hosts a second lounge and 29 private suites.

The Main Grandstand and the concessions buildings in the Grand Plaza were conceived as a modular system consisting of several components that can be arranged according to need. The concessions, with banners and deep canopies, can be expanded with restrooms, permanent seating or suites. Inherent to this “kit-of-parts” construction system is flexibility allowing the site to grow and change. 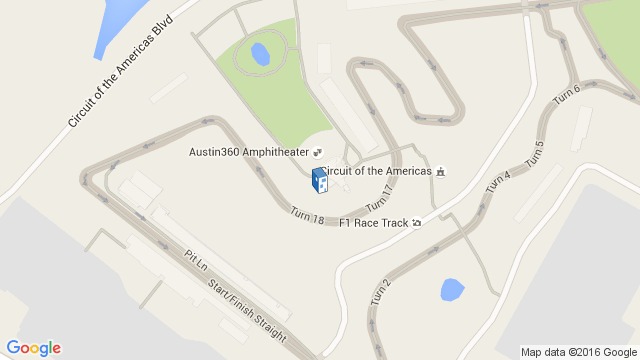