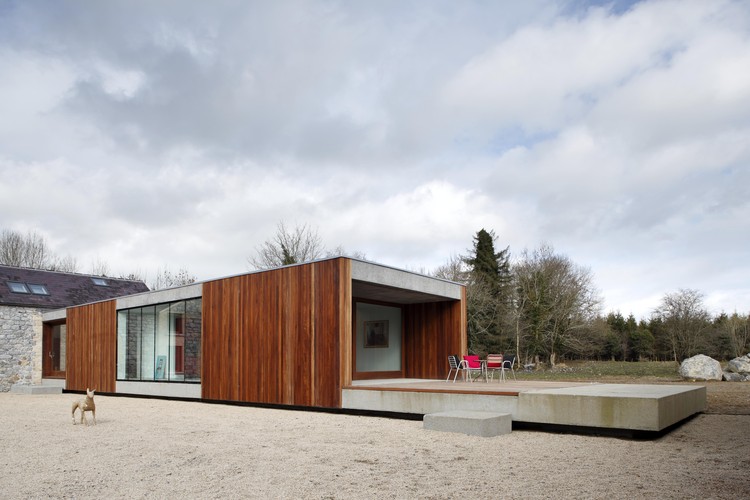 The introduction of this new wing is an attempt to complete the courtyard whilst allowing a visual transparency between the courtyard and the woodlands beyond. This is something, which is lacking in the existing collection of buildings. Large expanses of frameless glazing allow the user to engage with both the courtyard and the surrounding landscape. This is in stark contrast to the experience one feels when in the existing buildings. Their small aperatured interiors provide lowly lit spaces, which suggest secondary accommodation. Externally, the oiled cedar cladding attempts to connect this new wing to its wooded surroundings whilst offering warmth of material to the inner courtyard, something that is lacking in the existing collection of stone, brick and slate buildings. The use of highly aggregated sand blasted concrete tonally links this new wing to the existing collection of buildings.

The new wing has been raised off the ground to give it a float-like quality. This contrasts against the routed character of the existing buildings. This wing has been ‘skewered’ through the existing two storey farmhouse allowing the surrounding landscape to flood into the inner courtyard. The protruding section to the rear of the farmhouse, houses the master bedroom accommodation and forms an ‘eye’ to the surrounding woodland. The extended raised terrace off the dining area is an attempt to hold an edge to the courtyard. The mobile quality of this new wing, when viewed from the surrounding woodlands, suggests an ‘inhabited’ sliding door has been opened onto the surround woodlands.