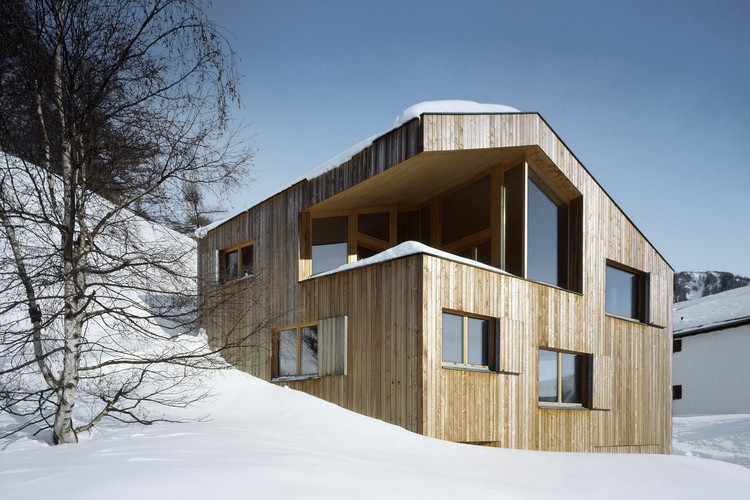 Text description provided by the architects. Breathtaking views of the surrounding mountain ranges and valleys, and dramatically steep hills characterize the site located in Feldis (Switzerland), 1500 meters above sea level. The subtle manipulation of a simple timber structure nestled along the contour lines of the hill, anchors it solidly in its rocky surrounding in a manner akin to a solitary rock outcrop displaced after a rock fall.

The seemingly monolithic holiday home appears once narrow and light, then wide and heavy, assuming a different aspect depending on the perspective from which it is viewed. Opening and closing the generously proportioned venetian blinds directly effects the external expression of the house. The simple internal organization can be interpreted in two ways. Firstly, the planning allows each room to serve the other, in an open hierarchy where both the kitchen and the storage units therein become part of this continuum. The second interpretation is an open, living unit on three levels, a space that flows uninterrupted from the entrance over the cascade of steps to the living areas.

A negative space, directly behind the outer layer of the skin, wedged as it were between, under and over the more intimate sleeping quarters structures the dynamic and the static spatial zones of the living sculpture. The elegant tuning and stretching of the structure allows the rooms internally to take full advantage of the spectacular alpine panorama. These rooms, varying in size, and geometry are designed to maximize spatial experience, each window framing a precise picture of the surrounding landscape. The occupants actively change the building’s external expression through the opening and shutting of the generously proportioned window shutters.

The environmental demands particular to the site, and the building process both determined the choice of timber as building material The choice of timber framing guaranteed the desired flexibility in planning and construction, whilst structurally, the characteristics of timber framing are complemented by the advantages of massive construction. The need for a simple, sporadically occupied holiday home meant the acoustic insulation could be minimised. Considerable reductions in the thicknesses of internal cladding materials not only simplified the construction but also led to considerable spatial gains internally.

The cantilevered roof above the terrace consciously stretches the construction system to its limit, the former being made possible by the full integration of the glazing element into the construction. The desired effect of a simple holiday home characterised by spatial variability is further strengthened by the rawness of the timber cladding. Leaving the construction unclad, lends the interior its archaic direct character, that can be more specifically expressed in the choice of furnishing.

Time should be able to leave its mark on the building. The continuous transformation due to the process of natural weathering is registered both inside on the venetian blinds, and outside on the exterior skin, and the steel plates deployed instead of the traditional concrete retaining wall. The eventual transformation of the building through time reflects a natural process aiding as it does the full integration of the house into its natural surrounding.