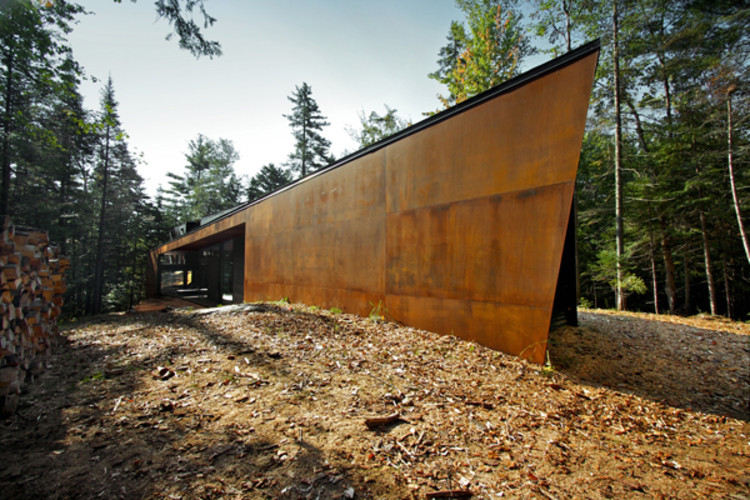 Text description provided by the architects. In the Laurentians, a dense forest on a slight hill, down-turns into the expansion of a small river. Through the trees, the body of a black building is divided into three blocks linked by glass passageways. Three blocks of a home, mid-level from each other, are all in direct contact with the earth. Three blocks of proper identity, offering intimacy between each and open to nature:

An entry block, open on two levels and includes the adolescents quarters and family room

A daytime block, central space, friendly, opens onto the terrace

A private block, owners suite, isolated from the rest of the home

On the north side of the house, a large section of bent corten steel connects the blocks together while defining a series of outdoor settings, always against the light. The chiaroscuro of the forest while both inside and outside the home, the black / white / orange / rust / bark / shadow / light / transparency / opacity.

Architecture of meeting and superposition of different geometrical shapes without stable parallel lines, like the landscape that surrounds it. Fragmented architecture where the geometric part of large oblique lines still allows a large formal union. Partly based in the geometric basis of the concept which dictates each project component, a sort of unwritten contract between architect and client. The modification of each element having a direct influence on the others, we can't enlarge or reduce a block in height and plan without enlarging or reducing other areas of the house.

This geometry which is both fragmented and linear makes the project a strong spatial experience, allowing direct and variable contact with the landscape. It is this angular part, made of dark and raw materials that unites the house to nature, like a rock that emerges from the ground. A forgotten shipwreck at the heart of the forest. 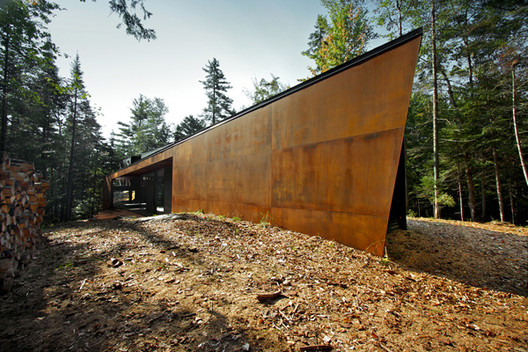