Focuses the attention on the African and International communities, the proposal by Group IAD for the Pan African Games Masterplan is represented by the lines connecting each African capital in Brazzaville. These generators form on the plot a beam of guidelines as a first filter that allows organizing the circulation areas of the program. Drawing its strength from the meanders of the Congo River, this project establishes a permanent dialogue with the river, its surroundings and Brazzaville. More images and architects’ description after the break.

Located in close proximity to the Congo River, the project is also referenced then by the symbolic values of strength, vitality, and future it projects including these meanders as generators and pathways through the complex. The boundaries of the 3 programmatic areas, meandering paths, directions of various African capitals and circumferences of the various programs and their needs in public spaces overlap as many layers as possible to generate the richness, complexity and vibrancy of this masterplan.

The program of the Kintele complex, its sports facilities, its general buildings, roads and other networks are arranged according to their need for access, visibility and security. 3 plots are generated proportionally to their required surface, providing a main access to the hotel and parking facilities, centrality for sports equipments and isolation and security for the housing and press facilities. We wanted to find in this masterplan the evocative shapes of African art. From the oblong shapes for programmatic spaces that reference ancestral masks or tribal shields to the ground work composition that refers to the tradition of African textiles and fabrics, everything in this Master plan calls to mind a small part of Africa.

The stadium is an object of soft geometry that integrates the volumes of the bleachers, respectful of the Masterplan guidelines and taking into account the circulation guidelines necessary for the functioning of the building. The playground and running track are the elements from which are generated the rest of the building. Spectator stands are defined as a continuous ring along the track and surround the playground In the northern sector. A half ring is added to the complex in order to take advantage of the best orientation.

The stadium roof is formed by two shells, one of them larger, to accommodate and protect a greater number of spectators in the most unfavorable direction. The position of the bleachers adapts continuously around the playground and running track. The Stadium envelope is generated by curved paths proposed in the Masterplan, The roof fits the ovoid shape of the stadium and pedestrian paths.

It is through this subtle geometry generated by a single plane dividing two spaces, two typologies that form a project meeting the aesthetic and programmatic expectations and integrating with the Brazzaville Sports Complex Masterplan. A spine is generated naturally while spaces are required by the program. The covered area hosting the covered swimming complex, and its symmetrical exterior. The inclination given to each end of this axis allows the creation of stands with angles necessary for good vision. The vertical column of the project is deformed and adapts to public space defined by the meandering paths. The volume generated responds to different programmatic characteristics and the aesthetic coherence of the complex.

In the configuration as covered exterior soffits, the bleachers generate in -between spaces needed for circulation and programmatic elements of the nautical center. The resulting geometry of this development offers a covered space, reminiscent of a shell, enclosed on one side by the inclined veil, generator of the project and the other by a curtain wall overlooking public spaces.

The sports hall has been creating from the limits defined by the peripheral paths, forming this shield’s shape. The building, like a truncated cone, a true hand-made wooden object, extends its presence through a set of equidistant strings stretched like a harp that generates a both poetic and useful solar control. Accesses to this in-between, semi- covered place are created in accordance with the main generators of the master plan.

The resolution of this program is a set of small communities, like small villages, places of life and well-being at a human scale, softly integrated into the proposed landscape of the Masterplan. Within the limits of the paths defined in the Masterplan, its geometry is established and takes the shape of two peripheral bands which will be located in the programmatic elements of the Athlete’s village. In order to reduce the impact of the housings blocks, also to give the module a human scale of a village, the ends of the buildings are kept at the minimum height and rises gradually. Programmatic “strips” for housing and services are perforated; faults are created to provide porosity, a flow towards the interior of the plot.

The result offered by this program is a set of small communities, like small villages, a place for life and well-being on a human scale, integrated into the landscape in the spirit of the proposed masterplan. Future modules of the village are generated by the intersection of two arcs forming, as in the rest of the masterplan, an oblong shape reminiscent of a tribal shield. Thus, two fringes are defined by the generating arcs, defining the residential and public spaces program. Brackets generated by the two buildings allow the creation of a central plaza dedicated to athletes, leisure and well-being.

Taking into account the lines of force that generate the Masterplan. As other programmatic elements of the complex, it defines its basic shape adapting to complex curved paths. The Programmatic fragmentation of the hotel that volumetrically separates public areas and lounges from private areas creating a base, a pedestal for the building that hosts the rooms.

The desire to create a beacon element through the use of a sculptural volume hollowed in its centre, built around an atrium and finally coated by a wooden skin of elegant blades that give the building an image of a contemporary totem all the while consistent with the African cultural values ​​present throughout the whole complex. 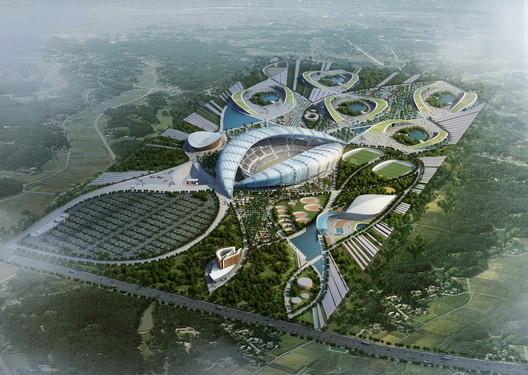