In the heart of Colombo, Sri Lanka, a lot surrounds a historic British-colonial building. In this country, density is not limited and the program quickly takes on an exceptional scale. Designed by Maison Edouard François, the 450,000m² Heritage Building is planned for offices, apartments, a hotel, a cinema, and a commercial center. As two spectacular bridges unite the three towers, the challenge becomes how to successfully create such a massive program adjacent to a historic monument. More images and architects’ description after the break.

The street in front of the colonial building is redefined:  the historic monument becomes the celebrated entrance for the new project.  The luxury commercial center is organized on several levels within the thickness of the tower bases.  The façades are covered with vegetation, a reminder of the hills of Ceylan tea production, and serve as a backdrop for the creation of an original décor.

One of the towers faces the port and is the lobby of the hotel, situated at 300 meters in the air and equipped with a swimming pool, restaurant and garden.  The other faces the beaches and the sea.  It is the lobby for the apartments, the spa, the fitness center, the salon, and other commodities.  The peak of the hotel is at 400 meters, just above the offices.

A multiplex cinema completes the program, situated at the -1 level.  The parking is mechanized, emerging punctually at the borders of the redesigned city block.  The project is a new amenity for the city, expanding progressively at the ground plane in order to avoid the habitual “podium” that is often found in this type of project. 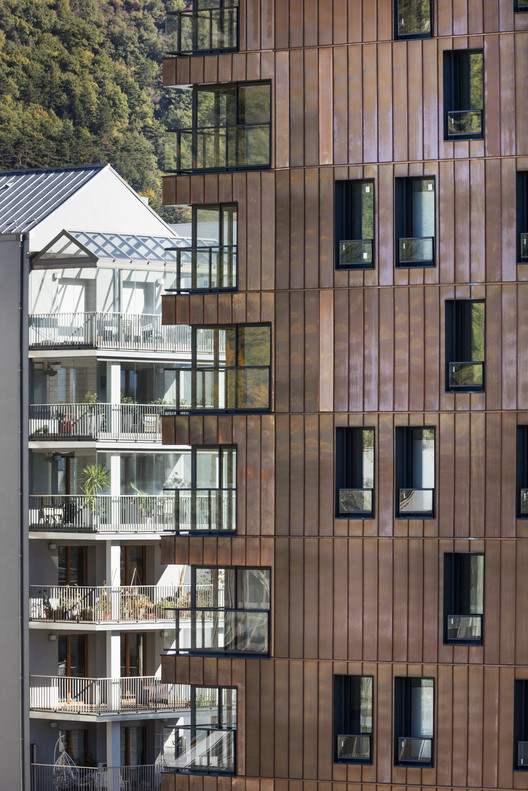