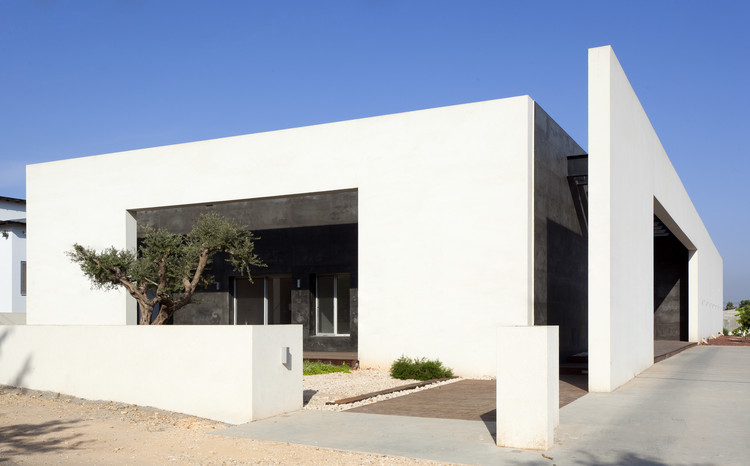 Text description provided by the architects. Creating an L shaped house, determined by the lot’s geometry, with flowing mass of blocks with horizontal lines and characteristics. The structure is relatively closed in the direction of the street in order to provide privacy, while part of the design concept was to create a stimulus and attract people to enter the house, like peeking through a keyhole. This concept is translated into the design of a front façade, built out of two layers with an opening in the wall, while the second layer, the inner wall, is in black stone cladding, with glass windows. All of these are slightly concealed by an olive tree, so that the effect is visible during the day as well (the wall covered by the stone and the olive tree), and in the evening by the light emerging through the windows, some of which are concealed by the tree.

The stimulus continues, thanks to the use of the dimension of time in the architectural design, by creating a clear, narrow and long entrance path with iron girders over the shading, built in rhythms up to the entrance to the structure, and the accompanying wall in black stone cladding, like the stone in the front of the structure.

The drama of the structure is created by the sight revealed when opening the door. In contrast to the mysteriousness surrounding the structure, the inner space is open, with glass walls, to the internal garden with a pool in its center.

The interior-exterior relationship is used as a significant motif in the structure design, beginning with creating a one-level house in order to assimilate with the surrounding rustic landscape and not create a conspicuous structure.

Another design motif was planned to create assimilation with the surroundings and a modest non-extravagant front, is the decoration-free façade.

The guest bathroom, family bedroom and additional bedrooms are all connected to internal gardens by completely transparent glass walls, which bring nature into the structure.

In the house design, the entrance is through a path accompanied by a long concrete beam with the shading of iron girders which lead to the front door.

Natural shading – in contrast to the slightly mysterious front façade, the wide living room and the entire garden area connected to the house opens with an unusual interior-exterior relationship. The pool and the front yard are delimited with concrete beams and columns which continue from the house, and there is actually no clear separation between the house and the yard and exterior. The windows and doors were planned according to the sun’s movement and exposures in order to conserve energy and create real green, non-trendy architecture. 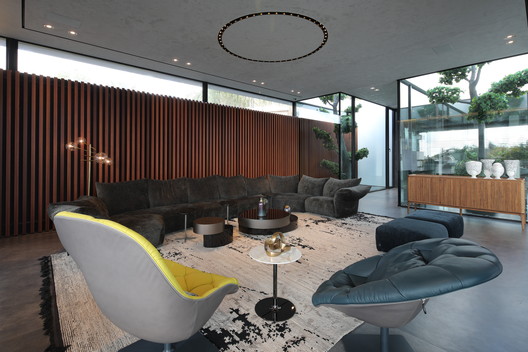