Designed by Henry Stephens, Nick Roberts, and Jack Davies, the winning proposal for The Lodge on the Lake returns to the issues bound up in Australian identity and issues of modernity. The lodge is both a development and a critique of the Australian relationship of landscape and dwelling, through an intersection of public assembly, intimate domesticity, and ground plane. From the composed house atop a plinth, to the slippages and interpolations that unravel down toward the lake, the lodge on the lake is a democratic marriage of land and architectural typology, introspective private dwelling, and public assembly. More images and architects' description after the break.

Australia's earliest settlers encountered a landscape they perceived to be harsh and expansive - 'they did not see the landscape of infinite space as sublime' (Malouf, 2010). Elizabeth Farrelly suggests this has led to a self-perpetuating condition in the national psyche - one where the immediate move towards occupation of this landscape is through an endless proliferation outward, along the ground plane. This notion paradoxically suggests both an adventurous exploration of the frontier, and a conservative lack of willingness to make a place within the landscape – to dig in.

Walter Burley Griffin's 1912 masterplan for Canberra was predicated on the notion that modernist tropes in urban planning could be reconciled with the particularities of topography, suggesting an occupation of the Australian landscape rarely aspired to.

Formally, the lodge is anchored by a split courtyard form, the frontal half sunk down into the earth forming a thickened, occupiable plinth on which the private volumes rest, while ancillary programs radiate out across the site. The notion of form augmented as a response to ground rewards a secondary reading; the constantly changing spatial conditions across the site resists the architecture being reduced to an idealized object.

Externally, the building both enfolds the landscape and is subsumed by it. Retaining walls draw visitors into a choreographed entry sequence, pulling them through the earth in a series of intermediary spaces - compressing the archaic nature of the subterranean with shifting weather conditions above.

Environmentally, the intersection of fluid topography and linear definition is equally considered; water collection aligns with human circulation patterns. These culminate in a series of carefully placed water detention areas, dedicated to purifying water, irrigation, and the prevention of flooding and erosion, depending on their location across the site.

Materially, the building suggests an acceptance of the Australian landscape's inherent hostility, utilizing a palette of concrete, local timber and recycled metal sheeting that will endure and record the cyclical patterns of sun, rain, and fire. This attempted reclamation by nature is welcomed, only serving to consolidate its place within the landscape.

Internally, manipulation of the courtyard form allows a programmatic organisation attuned to both intimate spaces of repose and a monumental depth suitable for public assembly. Coupled with an awareness of the topography outside, these ever-changing patterns occurring internally, encourage inhabitants to find their way through the site – a gesture toward the nomadic Aboriginal mode of dwelling where built-form is occupied like land-form. 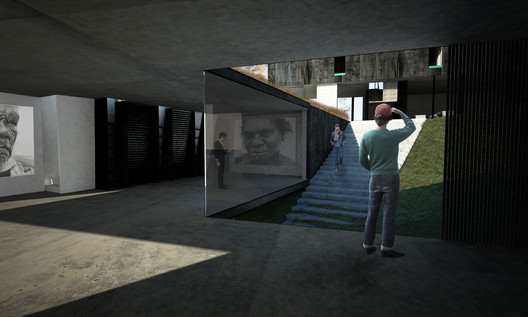 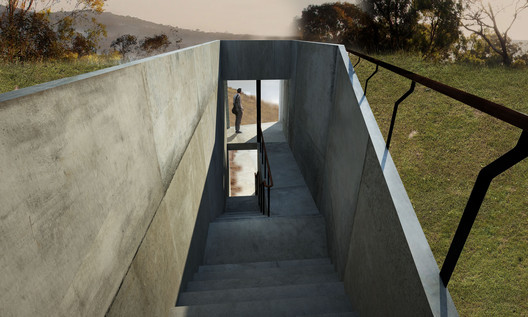 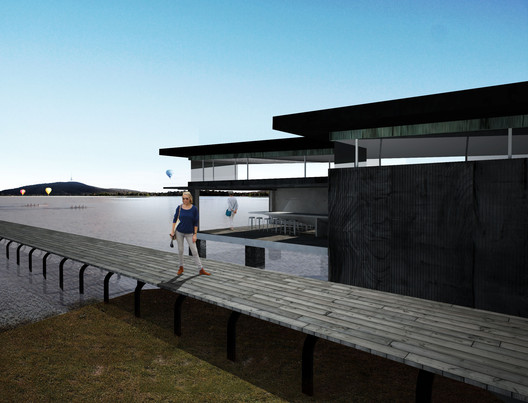