Text description provided by the architects. The Printemps building renovation

Situated on the historical Strasbourg Place de l’Homme de Fer, the corner building in which Printemps presents its deluxe department store offerings was recently the center of a major renovation entrusted to Christian Biecher. This building formerly consisted of six adjoining buildings aligned from number 1 to 11, on rue de la Haute-Montée in Strasbourg. The building facades were situated at number 1, 3, and 5, which formed the « Grad magasins du Louvre » at the beginning of the 20th Century, were unified in the 1940s. Lanter on, a concrete superstructure covered the ensemble, the building numbers 7 and 9 were rebuilt, and the articulation of the number 11 facade was left in contact with the other street elements. Today, following these various transformations, Christian Biecher gives the building back all its luster by endowing it with a facade resolutely modern and, in an original manner, he confronts the urban constraints linked to the project’s integration onto a site registered on the UNESCO’s World Heritage List.

With this project, Christian Biecher asserts himself as an audacious architect by making the Printemps the only contemporary building in the sector. The sales areas are concentrated in a rectangular space liberated by the contiguity of the six previously adjoining buildings. Connected by two escalators situated along the length of the new main facade, the different aisles of the seven commercial floors (from -1 to +5) are serviced by a central circulation. The very pale gold facade reveals the store interior as seen through volumes of glass that emerge from the buildings outer shell, which is marked by a set of vertical and diagonal ribbing, and triangular shapes draped across the opaque metallic surfaces. The ensemble maintains its modernity with a chromatic intervention of tone-ontone – even nearing monochromatic – and a similar treatment applied to the façade and the roof. The slope of the roof and the angle of the facade’s volumes of glass are thus animated by a singular movement that finishes, near the bottom, with a glass marquee that shows the high store windows decorated in Italian marble, covering two stories. The building distinguishes itself via a considerable consistency and a veritable unity.

Designed to become an essential element in the urban landscape, the original facade saw its bay windows modified: they were broadened and filled in with masonry. There are opaque aluminum parts and glass luminary elements that protrude and break the rhythm’s rigor. This series of vertical and slanting lines reasons with the rhythmic quality of the Strasbourg’s architecture. The opaque aluminum siding are set behind the volumes of glass that protrude onto the street, but go no further than a third of the surface of each floor. The architectural movement of the facade is completed by new awning that overhangs in an aligned fashion and the inclined glass panel extending up towards the first floor.

The choice of aluminum quickly establishes itself. The lightness of the material, along with its flexibility, gives the folding effect desired by the architect. Due to the protective anodized metal and the pale golden color, the sheet of aluminum that covers this new facade changes appearance depending on the light and how the visitors move about. Glass surfaces composed of exterior window jambs are closed off by frames, which take the shape of large open triangles capable of expanding across many floors. The triangular ribbing in anodized aluminum sheets the color of champagne have beveled edges and crisscross at each change in direction. The opaque parts composed of insulation panels are also covered with anodized aluminum siding. 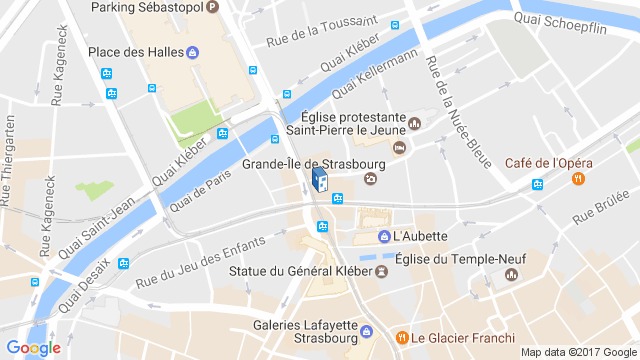 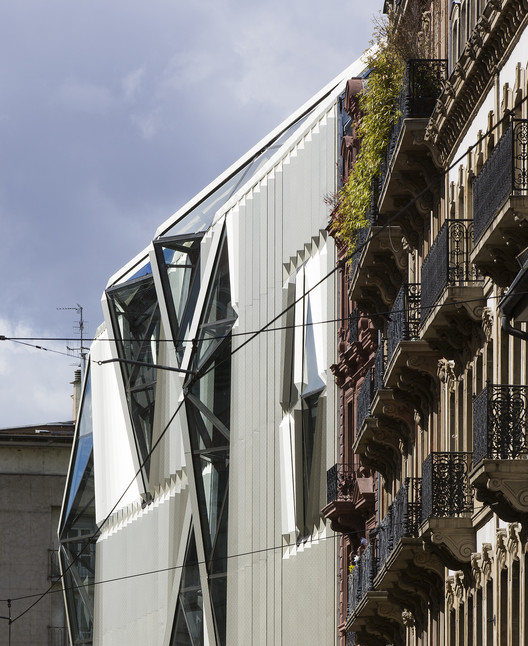