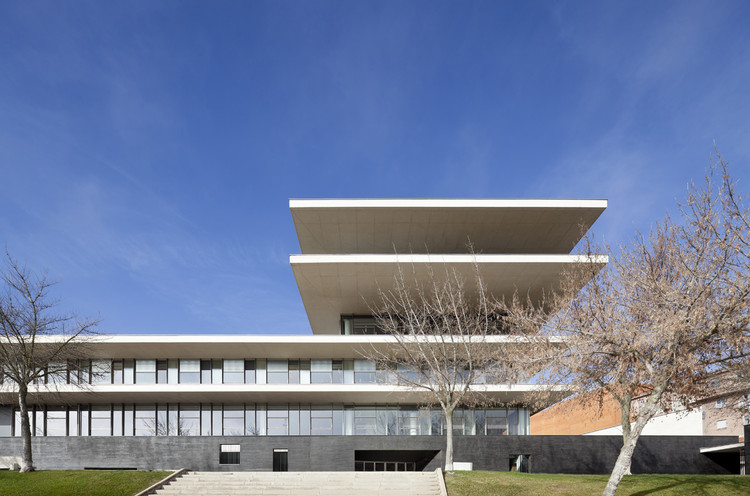 Text description provided by the architects. We have designed an administration building to house the headquarters of the delegation and services of the Council of Castilla y León in Salamanca in order to improve its performance, reduce costs and simplify maintenance.

The building is located in a peripheral residential neighborhood to the east of the city, in a trapezoidal lot with a steep slope, surrounded on two of its sides by a long party wall on which courtyards open up from the neighboring residential buildings. In its lower area, towards the south, the lot borders a public park and a street where the pedestrian and vehicle access is located.

We decided to design a building that enhances its character and reaches optimal functionality and flexibility. The building is aligned with the street and the park, and separated from the party walls creating a perimeter garden that serves as a vegetal buffer, which improves both the view and privacy of users as well as the urban image of the building. At the southern end lies the nursery and hall, which as a carved garden, gives up its presence creating a play of volumes and sunken yards that avoid competing with the large volume of the administrative building.

The building consists of a black concrete plinth that draws as reference the level of the access plaza and effectively resolves the height difference. It houses complementary uses such as nursery, auditorium, multipurpose classrooms, cafeteria and parking. On the plinth lies a white volume intended for the main administrative use, which in an L-shape of two and four levels surrounds the access plaza, which is a space that links the city and the building.

The proposal is designed with an idea of lightness and horizontality, opting for a system of white concrete landscaped slabs that pile and float on a plinth of textured, dark concrete. The windows are set back according to orientations. They give the building and ethereal character where the horizontal structure is protagonist. The landscaped slabs protect the interior rooms from direct sunlight and improve the conditions of privacy and visual comfort, reducing energy costs. The facade of the offices is a glass skin with color and transparency variations.

We begin with a square mesh (M=7.20m), that orders the natural growth of the building. The layout of columns is adjusted to the projected modulation, 7.20x14.40 m (1Mx2M), creating a unique structure of large spans and cantilevers of landscaped terraces that balance it. The facade is divided into sub-modules of 0.90m with 1-2-1 rhythms, which allows an easy change of distribution, predictable in this administrative use.

The building takes the monastic model and is organized around three courtyards, one smaller (2Mx2M) located in the access area, which is covered on the ground floor with a large skylight, setting the main lobby and two other gardened lobbies that structure the top area (3Mx4M). We propose an annular circulation around the courtyards, so that the offices, with an opaque screen, are located in the exterior perimeter, while the administrative areas, diaphanous and enclosed in glass, turn to the courtyards, providing space and light into the hallway. In the inner corners, framing the administrative areas, the building cores are laid out. As rotund, compact volumes covered in large format Calatorao stone, they reinforce their status and organize the space.

The spatial sequence that is produced around the access and entrance hall stands out in particular, as the main distributor of the circulation in the building, where the transparencies, sequence of voids and a single pyramidal skylight configure a rich spatial experience for the visitor. 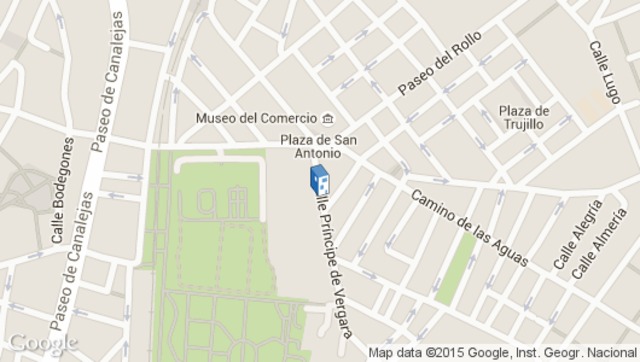