Described as an authentic structure influenced by its Minnesota location, the new stadium exhibits a bold, progressive design that combines efficient functionality with stunning architecture. With a soaring prow, the largest transparent roof in the world, and operable doors that open to the downtown skyline, the facility’s openness and sleek geometric exterior will make it unlike any other stadium in the country.

“The design reflects the true story of the Minnesota community with its international style driven by climatic response and energy conservation,” said Bryan Trubey, design principal, HKS Sports & Entertainment Group. “The interior volume makes it the most versatile, multi‐use building in the country with the most advanced digital age technology.”

Throughout the design process, HKS identified four major influencers that shaped the functional form and architecture of the building: climate, geography, history of important civic structures and technology. The recent pattern of modern and progressive physical form in Minnesota will continue with this facility, beginning with the roof. With ethylene tetrafluoroethylene (ETFE) on the roof’s southern half, visitors will feel as if they are sitting outside without being exposed to the elements. Sustainable characteristics will be utilized to produce lower operating costs in winter and summer, and the stadium’s sloped roof will be the most efficient roof structure in the nation, a remarkable engineering feat considering the snow‐loading requirements with Minnesota’s climate.

The new stadium will be capable of hosting more events than any other large stadium in the world. Despite its versatility, the stadium’s football configuration puts the fans closer to the field than in any other NFL stadium.

Groundbreaking for the new 65,000‐seat stadium will take place in October 2013, and demolition of the Metrodome will begin early in 2014. The new stadium is scheduled to be open in time for the Vikings 2016 season.

The project is currently under review by the Minneapolis Stadium Implementation Committee and the City of Minneapolis. 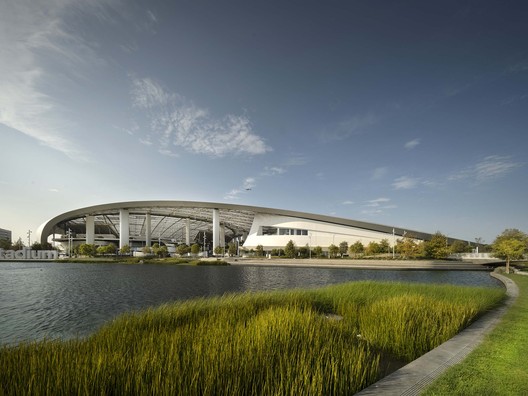