The proposal for the Cultural Center in Guadalajara draws its inspiration from the following definition of culture by Pufendorf: “All the ways in which human beings overcome their original barbarism, and through artifice, become fully human”. Through this definition, this design by K+P Architects focuses on two different states of the building: The primitive state and the social state. More images and architects’ description after the break.

The first state of the building. “primitive” state, is reflected by the agglomeration of all vital functions for the operation of a building (infrastructure core). This nucleus is independent, rigid and uncompromising with the surroundings. Second, its “social” state, encompasses the programmatic functions of the building; these functions are assigned to its identity. This body wraps and compromises with the existing urban structure.

The facade of Corten steel and glass enables the city dynamic can flow into the cultural center, interacting with all the functions “pods” mediated by the free organization in open spaces. The intervention is assumed as a metaphor of the importance of culture and its dynamics are for the development of man as a cultural being. 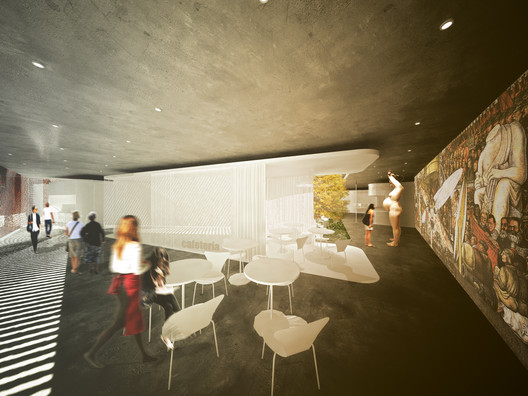