Designed by Lapo Ruffi and Vanessa Giandonati, their ‘Fragments & Miracles’ project proposes the construction of an architectural landscape on old foundations, a simultaneous source of wonder and contemplation. The project is related to the context of the landscape’s coastline because of its differentiated permeability and its connection with the environment's point of strength. Walks, south and north, are connected to the Old Street of Italy which, abandoning its original mission, becomes a witness of Veytaux Villeneuve pedestrian link. More images and architects’ description after the break.

This ambition is part of a careful reading of the living areas of the landscape, where the project becomes a tool of "invention, design a theater instead of experience whose architecture is the backdrop, support necessary for an event "(Aldo Rossi). Approach therefore sensitive, emotional and sensory perception in which visitors are inseparable elements of the place - water, rock, vegetation - and where a walk around a lake can turn into "box miracles."

In the insular landscape of Chillon, defined in various episodes as the Castle, the upper garden, the lower garden, the beach, the lake shore, the project integrates the service building of the castle and several scattered fragments. Founders of new events overwrite the topography of the landscape, welcoming sedimentation architecture built on a base: the new service building, a new Pavilion and its fragments will reach the stones used instead previously demolished hidden then found again silenced by offering them a new life.

The act of grafting on the rocks of the founder core Chillon Pavilion and garden one inseparable element with the elimination of false ruins and transforming the place into an enclave of civilization past and future base remains of the old village and the new pavilion.

The north shore, most of which is hidden by vegetation, maintains its intimate character which will continue the top path, protected along the railway connection, and runs to the lake, domestic enclaves contaminated recreational facilities. The south shore, designed as a single paved path in contact with water, hidden road access area and parking spaces at its ends with valuable green spaces that host trees in a progressive set of views from and to the castle, and leads the visitor and the visitor on a journey along the lake characterized by stops, rest and observation.

The old Rue d'Italie, pedestrian and open to cars only when necessary, find in its size and in the treatment of parallel green, dense and sparse north to south, this visual progress that offers from the main entrance, images of places the visitor disguising service objects, external deposits and highlighting the entrance to the heroes of the scene, the Castle, the bazaar, the new architecture.

Fragments, small two-dimensional or three-dimensional devices, introduced today and continues without interruption, becoming the point of contact with the elements of the site, water and strike a cognitive modality distinct landscape. The vision of the viewer will be catalyzed by the platforms or frameworks where "space is not the environment in which things have, but the means by which even the position of things becomes possible" (Robert Morris). Visual fragments, pontoons stretched over the water, are the notes framing the landscape on the south shore where to stop, rest or simply marvel, forward time horizon: the castle, the lake, the mountains .Equipped fragments, hollow masses, so binoculars will be integrated in nature, reorganizing inside them the necessary relaxation area on the north shore, protected to the Castle for accessories.

The project proposes to construct the built landscape, inhabited by unit forms or assemblies, where stereotomy and the tension between the parties following the consecutive additions defining the architecture of the castle, looking for a tension between morphology and built the vacuum defined by the path to the castle bridge, the Bazaar and the input of new Services Building.The recall of these architectures in the new building creates a Petrified Body, where the spatial dimension functions within a mass that continues the centenary dialogue established between the castle and the landscape.

The compact building volume service brings the heritage of the ancient tradition of building in layers of revaluing and adapting to new requirements with the modeling of an architecture where the wall hides a space: the lobby, stairs, service areas, break rooms and contemplation of architecture and landscape.

A Petrified Morphology therefore, the overlapping functions allow the material to dig its most symbolic points, the upper floor of trade seems safe, holed up to the entrance and opening like big eyes on the horizon and the castle, while the lower floor of the cafeteria is emptied of its contents, and drawing a large balcony that runs through the garden, suspended between the foundations and the upper block empty. The idea was born from the evocation of place, the desire to preserve the direct relationship between the garden and the existing route. 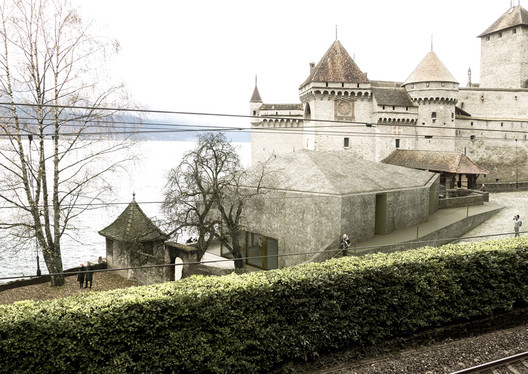