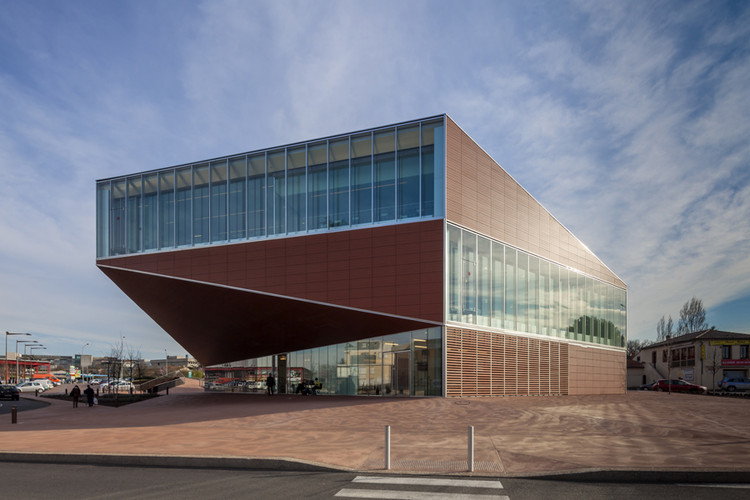 Text description provided by the architects. The construction of the new multimedia library of Montauban is spearheading an urban renewal project in the eastern quarters of the city. It must mark the entrance to the city, providing an identity to these neglected neighborhoods while still representing the city of Montauban. In parallel it is a project of reinvention: in these times of the digitalization of knowledge, the challenges of such a design are of spatialization and of materialization of the information and its division. This is the "third place" between domestic space and work space.

The field of influence of the future multimedia library is bordered and cut by roads whose geometries are marked by history. The road crossing the site was developed by the 19th century: the former fragmented land, and thus a part of the blocks built adjacent to the library, yields to this geometry; the road along the land to the south is a bypass created in the 19th century; finally, the roads and built blocks to the north are marked by the creation of the district from the 60s to the end of the 70s. How to join these various lines?

The interpretation of the program resulted in dividing it into three equivalent parts: a citizens' forum, a large reading space that invites discovery and meetings, and rooms for reading and working. By superimposing these three programmatic entities, placing the last level obliquely so that it shares its diagonal with the two lower floors, and linking them by triangulation, we generate an interior spatiality that responds to the architectural brief and a volume that addresses all the geometries of the site. Indeed, the ground floor and the first floor border the 19th century road. To the south, the overhang is slightly shortened to fit the curve of the bypass. The second floor is placed perpendicular to the Louis XIV road and locates the building and its outline within the dominant historical geometry. Finally, the triangulation uses the geometry of the recent urbanization, marking the northern part of the lands.

From the neighborhoods being restructured, the visitor accesses the multimedia library under the northern overhang that protects it from nuisances of the bypass road and the autumn wind. On the ground floor, the citizen forum is for pedestrians and welcomes visitors. In direct visual relationship with current events, the first floor contains the “imaginary worlds", a place of exploration and discovery addressing all age groups. It enjoys stepped reading spaces that connect it spatially and visually to the second floor. The latter is moved to the mezzanine over the "imaginary worlds", which benefits in this way from a contribution of natural light overhead. At the ends of these two reading spaces, high windows frame the individual elements of the context: the entrance of the city, a grove of preserved centenary trees, the city center of Montauban. By means of the initial geometric manipulation, the interiors of the media library come into resonance with the city. The interior spaces are free from any bearing point: a total flexibility of use is assured.

The building is draped with a coat of terra cotta, a tribute to the brick architecture characteristic of Montauban. Only the large panes of glass on those floors with reading tables pierce this unusual block of terra cotta. The treatment of the outdoor spaces with tinted concrete evokes the cobbled sidewalks of the old town. 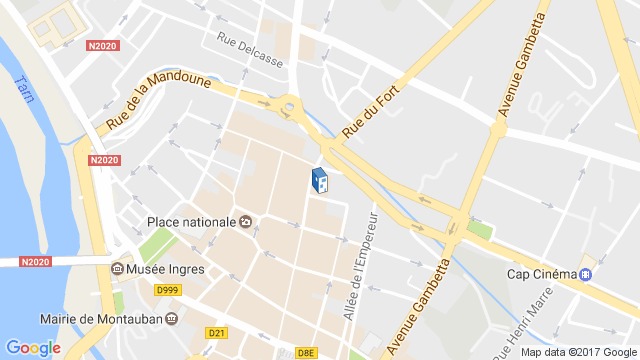